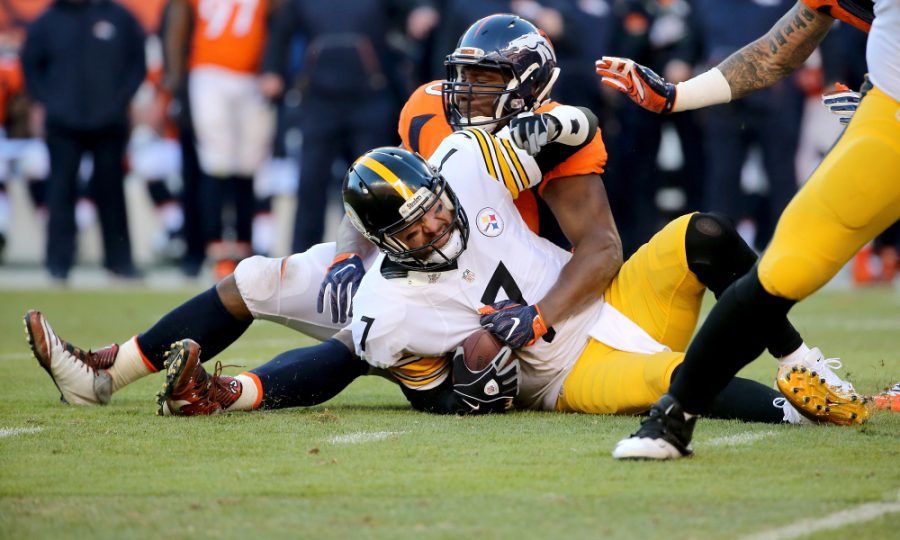 DENVER, CO – JANUARY 17: Ben Roethlisberger #7 of the Pittsburgh Steelers gets sacked by Antonio Smith #90 of the Denver Broncos during the AFC Divisional Playoff Game at Sports Authority Field at Mile High on January 17, 2016 in Denver, Colorado. (Photo by Doug Pensinger/Getty Images)

After an improbable comeback last week against Jacksonville, the odds were in favor of the Steelers in their week 12 matchup with the Denver Broncos. However, it became apparent quickly that Denver was better than advertised, especially on the defensive end, as they stifled the Steelers in a 24-17 win to keep their playoff chances alive. The Broncos’ defense made Ben Roethlisberger look below-average as they forced him into 2 interceptions, including one in the red zone to end the game, and Denver held Roethlisberger to a pathetic 88.5 QB rating. The Steelers’ didn’t help themselves much either, losing 2 key fumbles. Many questioned the play calling, as at least one of the interceptions was an ill-advised pass. One major critique recently for Pittsburgh has been the failure to utilize the run game, as the Steelers have a vauable rushing weapon in James Conner, yet his numbers have dropped dramatically in the last 2 weeks.