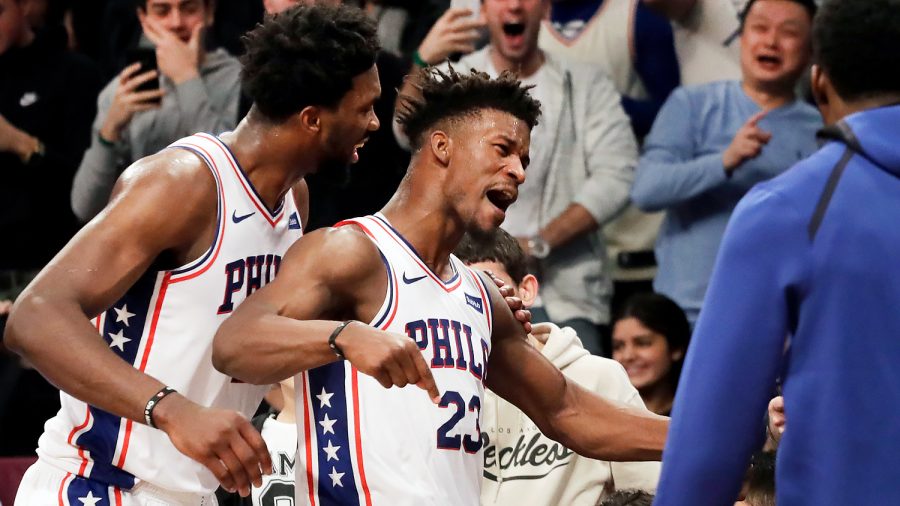 Joel Embiid celebrates with Jimmy Butler after Butler drilled the game-winning shot for the Sixers on Sunday night.

Jimmy Butler Does It Again At The Buzzer

For once, Sixers fans enjoyed a dose of positive déjà vu on Sunday night as newly-acquired star Jimmy Butler knocked down his 2nd, last-second game-winning shot in the last 5 games. The shot completed a furious Sixers’ comeback to knock off the Brooklyn Nets in a 127-125 win; Philadelphia outscored Brooklyn 38-23 in the 4th quarter.  The shot was, in many ways, an exact replica of the game-winning shot he drilled on November 17th in Charlotte to defeat the Hornets. Exact same location, exact same shot, exact same result: 3 points and a Sixers’ win. The only differences were that the score was tied in overtime in Charlotte, but in Brooklyn, the Sixers were down by 1, and a miss would all but guarantee a loss. But Jimmy Butler isn’t in the business of missing, as indicated by his fantastic statline on Sunday night: 34 points, 12 rebounds, 2 assists, a .550 FG percentage, and a perfect 7/7 from the free-throw line. Jimmy Butler, if you weren’t already before, you’re officially a Sixer now.