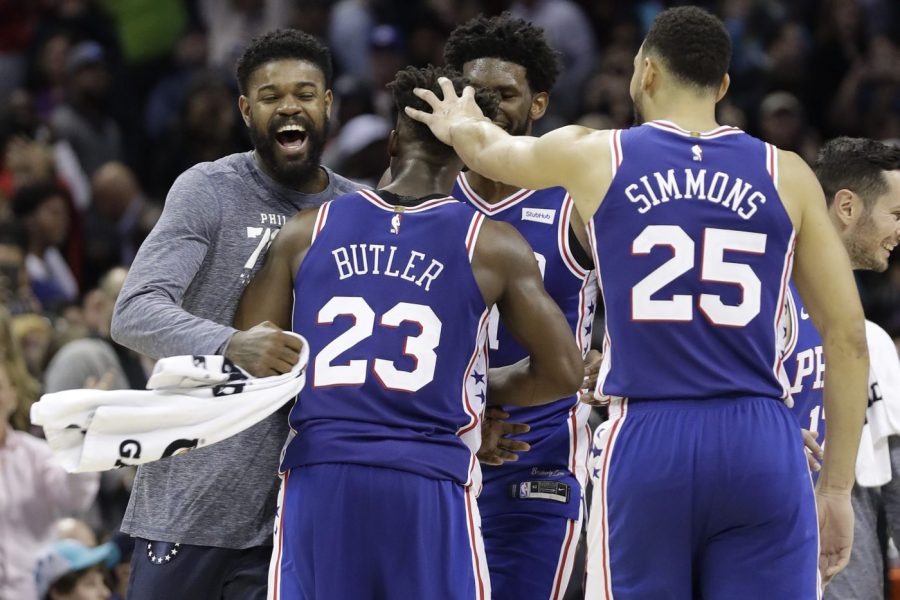 Amir Johnson, Ben Simmons, and JJ Redick celebrate with Jimmy Butler after he nailed the game-winning 3-pointer in Charlotte on Saturday.

There’s no quicker way for an athlete to earn the fans’ endearment than to win, and Jimmy Butler has officially solidified himself as a Philly athlete with his cold-blooded game-winner on Saturday. The game between the 76ers and the Charlotte Hornets was on pace to be historic, but not for a reason the Sixers wanted. Charlotte Hornets’ Kemba Walker was absolutely on fire, as he dropped 60 points on the Sixers, but Jimmy Butler and the Sixers would have the last laugh, as they went into overtime in a deadlock. With less than 30 seconds left, locked at 119-119, Kemba Walker drove to the basket, but was quickly denied with a brutal block by none other than Jimmy Butler, who saved the Sixers from giving up a basket and simultaneously saved the Sixers from turning the ball over out of bounds. Then, as the clock ticked down with the shot clock unplugged, Butler stepped up for a 3,  and promptly drained it as the clock hit 0.3 seconds left. The shot endeared Butler to the Philly fans, and saved the Sixers from another potentially humiliating road loss. Jimmy Butler, officially, welcome to Philadelphia.