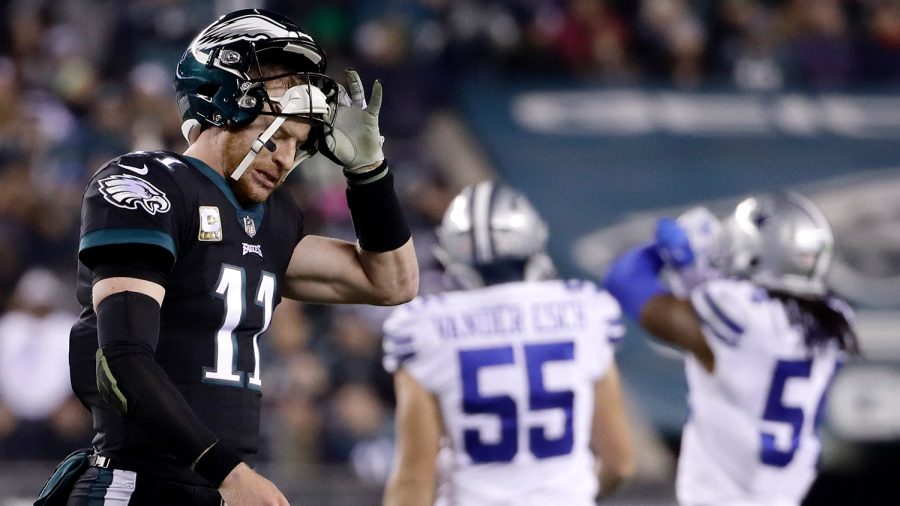 The Six Things Wrong With the Defending Champion Eagles

The Super Bowl champion Philadelphia Eagles aren’t doing well as top dogs. At 4-5, the Eagles are seventh in the NFC wild-card race, just ahead of the 3-6 Tampa Bay Buccaneers, and now face the very real risk of missing the playoffs. There is no one single source of blame. They look like last year’s Eagles and they play like last year’s Eagles, but by record, they have been a bad football team. Philadelphia’s playoff hopes have been dying a death from a thousand papercuts. Last year’s Eagles became famous for team victories as underdogs, but this year’s squads have become known for team losses as favorites—everybody plays a small part in losing a game they were expected to win, and that was on display in their 27-20 loss Sunday night.

Carson Wentz Is Great (Most of the Time)

Carson Wentz’s stat line looked excellent—32 completions on 44 attempts for 360 yards (8.2 yards per attempt) with two touchdowns and an interception—and he played well for most of the night, but he also took points off the board at crucial moments with off-target throws. He particularly didn’t show much chemistry with Alshon Jeffery (both missed practice time with injuries in August and September). Toward the end of the first half, Wentz failed to connect with Jeffery on a pass that could have put the Eagles in the red zone, and Philly settled for a 56-yard field goal.

He missed Jeffery again in the end zone on a third-and-7 from the Dallas 8-yard line down 13-3 on Philly’s first drive of the third quarter, and the Eagles again settled for a field goal. Then on Philly’s final drive, Wentz didn’t see a wide-open Jeffery while scrambling on a play that would have put them deep in Dallas territory. If they had turned either of their field goal opportunities into touchdowns, kicker Jake Elliott would have had a shot at a game-tying field goal in the fourth quarter. Instead, the Eagles had to settle for a desperation lateral at the end of the game because they were down 27-20.

No Replacement for Jay Ajayi in the Run Game

The Eagles have not been able to replace Ajayi’s presence since he tore his ACL earlier this season. Wendell Smallwood had two carries for 4 yards and three catches for 30 yards, Corey Clement had five rushes for 13 yards, and rookie Josh Adams led the team with seven rushes for 47 yards. Yet none of the team’s backs were able to make the same impact when it mattered, especially when Philadelphia needed a first down and Ajayi often came through in the clutch. The Eagles rushed for just three first downs on Sunday night, a shortcoming punctuated by Eagles coach Doug Pederson deciding not to go for a 37-yard field goal from the Dallas 20 and trying to convert a fourth-and-1, only to see rookie running back Josh Adams lose 3 yards on the play.

The Eagles’ offensive line hasn’t been playing at the same level as it did in 2017, and they went into Sunday night’s game against Dallas without Lane Johnson at right tackle. On the aforementioned fourth-and-1 play, Adams is stuffed because Johnson’s replacement, Halapoulivaati Vaitai, is blown into the backfield. With the Eagles facing third-and-2 and down 27-20 from Dallas’s 30-yard line, Wentz threw a screen to Clement. He seemed to have plenty of green in front of him for the first down, but Cowboys rookie linebacker Leighton Vander Esch beat Vaitai on the play and tackled Clement for a 5-yard loss.

It may be hard for Eagles fans not to wonder if the game would have gone differently if Johnson had played instead.

Pederson opted for a rookie running back who is less than stellar in short yardage to get the first instead of calling for a quarterback sneak with Wentz. The decision is questionable to begin with, and Pederson should be cognizant that the line isn’t performing as well as it did last season.

Perhaps it’s inevitable that the Eagles offense has taken a step back after the post–Super Bowl brain drain saw offensive coordinator Frank Reich hired as head coach in Indianapolis and quarterbacks coach John DeFilippo move onto Minnesota to conduct a symphony with Kirk Cousins and Adam Thielen this year. Philadelphia’s game-planning was extremely collaborative last season, and Pederson is likely feeling the strain of losing some brilliant assistants. The Eagles have had three consecutive losses at home and dropped the game after their bye week to the Cowboys, who were coming off of a short week of rest. Pederson’s play-calling was a big part of Sunday’s loss, and it hasn’t been as good as it as was last year.

The Defense Has Regressed

The Eagles’ secondary was already a prime suspect for their decline. Then the team entered Sunday without cornerbacks Jalen Mills and Sidney Jones; when Ronald Darby suffered a knee injury, Philly was left without its top three cornerbacks. Suddenly Dak Prescott looked like Troy Aikman. The cornerbacks in their place, particularly Rasul Douglas, were burned by the Dallas QB repeatedly, especially in the fourth quarter, and Prescott finished with 270 passing yards, just 3 yards short of his season high.

Philly’s defensive line was able to pressure Prescott in the passing game but it failed to control the line of scrimmage in the run game, and the Eagles’ missed tackles throughout the game extended Cowboys runs, drives, and eventually their lead as Ezekiel Elliott finished with 187 total yards.

The Eagles gave up perhaps their worst defensive series of the season, letting Dallas drive 75 yards on eight plays in just one minute and 14 seconds to take a 13-3 lead going into halftime, a sequence which included allowing a 25-yard pass to receiver Michael Gallup on third-and-15 where the Eagles lined up with defenders stretching across the first-down line like they were playing Red Rover. Philly’s next game is against New Orleans, which just scored on their first nine possessions against Cincinnati. If Jason Garrett left Sunday night’s game smiling, it’s hard to imagine what Sean Payton might do to this secondary.

Ertz was the best player on the field for Philly on Sunday night, finishing with 14 catches for 145 yards and Philly’s only two touchdowns, but the Eagles’ Super Bowl hero came up just short on the final play of each of their final two drives. On fourth-and-7 of their penultimate drive, Ertz caught a pass from Wentz that was slightly off. Ertz couldn’t corral the ball immediately and the refs called Ertz down short of the first-down marker.

On their final drive, Ertz came tantalizingly close to the end zone, but he lateraled to Golden Tate, who was tackled. It’s an excellent microcosm that Tate, Philly’s desperation deadline acquisition, was tossed the ball in a hopeless situation and ended up coming up short.