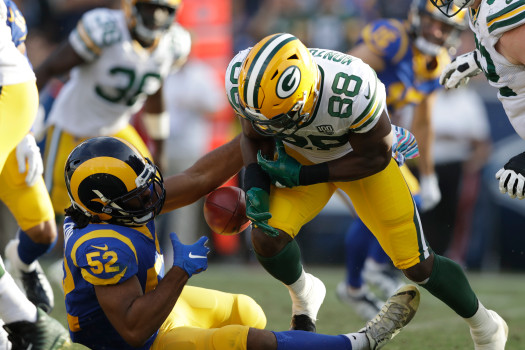 The LA Rams Finish First Half of Season Undefeated

Davante Adams already had it figured out in his head exactly how the Green Bay Packers would engineer the game-winning drive and hand the Los Angeles Rams their first loss of the season.

He and Aaron Rodgers just needed the ball.

Much to their dismay, they never got it.

Ty Montgomery fumbled the kickoff on a play that was never supposed to happen after the Rams had gone up 29-27 with 2 minutes, 5 seconds to play.

That’s because Montgomery, the Packers’ backup running back, was supposed to take a knee after catching the ball 2 yards deep in the end zone.

“The plan there is to stay in the end zone,” Packers coach Mike McCarthy said. “… But that’s what those games comes down to. There’s decisions and Ty’s in that decision situation, and I’m sure Ty was trying to make a play.

“So, I don’t know exactly how deep he was, if it was close. But I think we all realize with the management of the clock and where we wanted to be there, we wanted to be north of two minutes with the one timeout. We wanted to put the ball in Aaron’s hands. But you also trust your players — tough decisions, close decisions — and like I said, I think Ty was just trying to make a play.”

Ty Montgomery’s late fumble on a kickoff return kept the Packers from getting a final shot at the win, as the Rams ran out the clock Sunday afternoon.

As expected, Montgomery declined to talk to reporters after the game.

“How much do I feel for him?” Adams said, repeating the question. “Obviously, he’s not trying to fumble the ball, but you’ve got to be smart in situations like that. I know he’ll learn from it, but at the same time that doesn’t change what happened today.”

Rodgers had huddled with Adams and the rest of the Packers’ receivers on the sideline to formulate a plan for the two-minute drive when Montgomery fumbled with 1:56 remaining. The Rams recovered and ran out the clock.

“The game was won,” said Adams, who caught five passes for 133 yards. “I already worked out in my head how everything was going to happen. All we needed was the ball. It’s disappointing. Our defense played a great game against a tough offense, but at the same time we’ve got to finish.”

Rodgers engineered last-second drives to beat the Chicago Bears in the season opener and the San Francisco 49ers on Oct. 15.

“Yeah, very disappointed,” Rodgers said when asked for his reaction to not getting the ball back. “That play didn’t lose the game, but it definitely took away an opportunity for us to go down and win it.”

Although Montgomery has experience as a return man, he’s not the Packers’ primary kick returner. That would have been Trevor Davis, but he was placed on injured reserve last month with a hamstring injury.

Davis is eligible to return if the Packers want to use one of their two spots on it.

The Packers once cut a kickoff returner the day after a fumble in a loss. It was in 2013 when they dumped receiver Jeremy Ross after a fumbled kickoff.