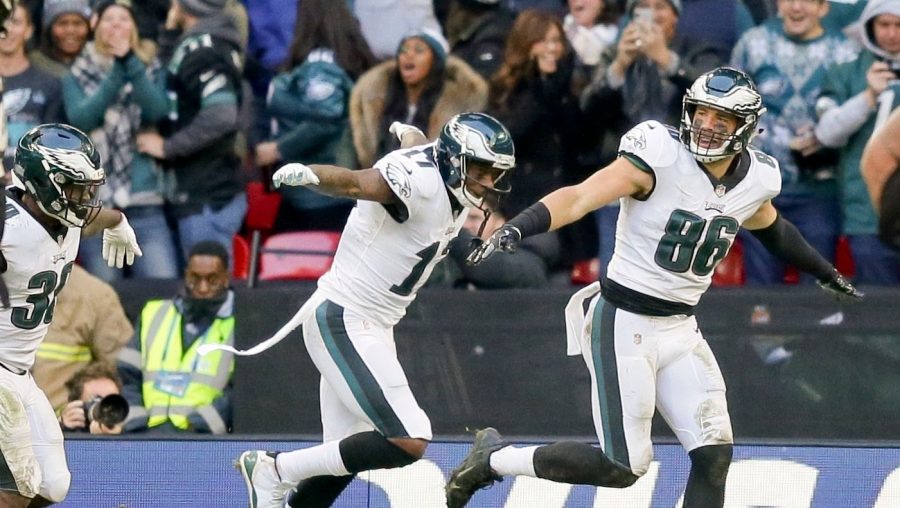 The argument could be made that the Eagles and Jaguars entered their Week 8 game at Wembley Stadium in London as the most disappointing teams in their respective conferences this season. Things got worse for Jacksonville on Sunday; its 24-18 loss to Philadelphia dropped their record to 3-5 halfway through a season in which Super Bowl expectations were realistic.

Then again, since 2011, seven teams have made the playoffs after starting 3-5. That’s the silver lining for the Jaguars. As for the Eagles, they’re now back to .500 (4-4) and still a strong contender in the NFC East.

Tight end Dallas Goedert caught one of the touchdown passes in the first half, and running back Wendell Smallwood and tight end Zach Ertz scored theirs in the second half for the Eagles (4-4), making their first appearance in England.

Blake Bortles, restored as the starter despite being pulled in a loss to the Houston Texans a week earlier, completed 24 of 41 passes for 286 yards for the slumping Jaguars (3-5), who lost their fourth consecutive game.

Despite Jacksonville’s familiarity with playing in England – it was the Jags’ sixth consecutive year of playing overseas, and they had won their last three – the record crowd of 85,870 formed a decidedly pro-Eagles crowd.

That didn’t matter early as the Jaguars took the first lead, forcing a fumble with a sack of Wentz on the opening possession. Josh Lambo made a 51-yard field goal.

Wentz was intercepted in the end zone by Jacksonville’s Jalen Ramsey on the ensuing possession, ending an eight-play, 63-yard drive on which the Eagles appeared poised to score. They were unable to answer until midway through the second quarter, when Jake Elliott made a 31-yard field goal. But Lambo inched the Jaguars ahead again by making a career-long 57-yard attempt with 2:48 remaining until halftime.

After forcing the Eagles to go three-and-out on the following possession, the Jaguars appeared poised to run out the clock. But a hit by rookie Avonte Maddox on wide receiver Keelan Cole after a 16-yard reception into Philadelphia territory gave the Eagles the ball back. Wentz and Goedert made the Jaguars pay, needing only a minute to score when Goedert’s 32-yard catch helped Philadelphia claim a 10-6 halftime lead.

The Eagles extended the advantage to 17-6 in the opening minutes of the third quarter when Smallwood took a screen pass 32 yards into the end zone, capping a nine-play drive that started at their 5-yard line.

The Jaguars followed with a sustained drive of their own, marching 75 yards over nine plays and finding the end zone when Bortles connected with Dede Westbrook under the uprights to trim their deficit to 17-12. Jacksonville failed to score on the ensuing 2-point conversion when Bortles couldn’t find Westbrook a second time.

After again holding Philadelphia to a three-and-out, the Jaguars could only turn to Lambo for another successful field goal, from 33 yards.

The Eagles scored the decisive points with 10 minutes, moving to 24-15 on Ertz’s 5-yard touchdown reception and the extra point. Jacksonville once again failed to score a touchdown from the red zone, with D.J. Chark dropping a 6-yard pass in the end zone on third down before another Lambo field goal.

Philadelphia nearly handed the ball back to Jacksonville with 6:48 remaining, Josh Adams appearing to fumble at his 35-yard line. But replay review overturned the call on the field.

Jacksonville regained possession three plays later and, after Bortles ran to convert one fourth down, he could not pick up another and the Eagles held on.

Jordan Matthews had a team-high 93 yards receiving for the Eagles. Running back Carlos Hyde, making his debut for the Jaguars after a trade from the Cleveland Browns, finished with 11 yards rushing on six carries.

Both teams look to compete for a championship and nothing less. Eagles (4-4) host the Dallas Cowboys after their bye week, as the Jaguars (3-5) face the Indianapolis colts on the road, also after their bye.