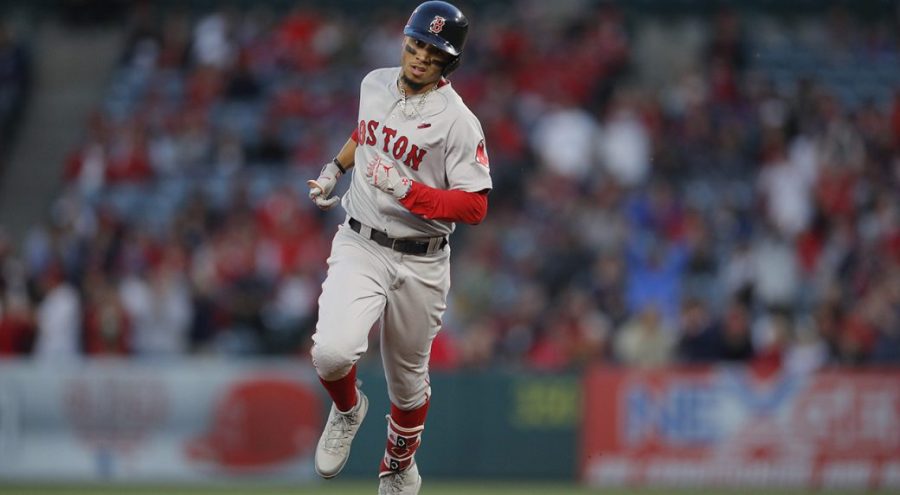 Mookie Betts Celebrates Around the Bases as Red Sox Win 4-2.

J.D. Martinez capped yet another Red Sox two-out rally with a two-run single in the fifth inning, lifting Boston to a 4-2 win over Los Angeles in Game 2 of the World Series on Wednesday. The Red Sox lead the 114th Fall Classic 2-0, which historically gives them an 84 percent chance to win their seventh title in franchise history.

Martinez, who led baseball with 130 RBIs during the season, looped a slicing single in front of deep-playing right fielder Yasiel Puig. Boston has scored 36 of its 68 postseason runs with two outs. One batter before Martinez, Steve Pearce tied the score with a bases-loaded, two-out walk against Los Angeles reliever Ryan Madson.

The rally was enough to back another solid postseason outing from David Price, whose playoff hex seems to have been lifted. Price allowed just two runs over six innings in winning his second straight start. Boston has won Price’s past three starts this postseason after his teams had lost 10 straight of his playoff outings.

The winning rally started when light-hitting catcher Christian Vazquez punched a single to right. Mookie Betts singled and Andrew Benintendi worked a walk to load the bases and send Dodgers starter Hyun-Jin Ryu to the showers. Madson was called on to extinguish the threat. Instead, he nearly hit Pearce with his first two pitches and issued the game-tying walk three pitches later.

Madson, who also struggled as the first pitcher out of the L.A. bullpen in Game 1, has allowed all five runners he has inherited in the World Series to score. In a series that has seen Boston play mistake-free for two nights, those individual struggles for the Dodgers continue to loom large.

Puig’s two-out single put the Dodgers ahead in the fourth, a looping liner that just eluded the glove of Boston second baseman Ian Kinsler. The Dodgers had tied it earlier in the inning, when Mr. Late October David Freese punched a single to right to start the frame. It was the Dodgers’ first hit off Price. Manny Machado followed with a sharp single to left.

The key at-bat of the inning may have been Chris Taylor’s walk to load the bases. Taylor took three borderline pitches to reach base, which set up Matt Kemp’s sacrifice fly to center. When Puig came through with two outs, L.A. had its first lead of the World Series.

The Red Sox drew first blood with a run in the second on a RBI single by Kinsler with — you guessed it — two outs. It was another cold night for baseball in Boston, with the game-time temperature dipping to 47 degrees and a brisk wind working the flag in center field. Three hours before the game, a rain shower stopped and a late-evening sun appeared, creating a fully formed rainbow that stretched from the Green Monster to the Pesky Pole.

Once night fell, a full moon appeared high above the Prudential Tower. Was it a strange kind of double omen, the kind that title-starved Sox fans once believed?

Xander Bogaerts, who got Boston on the board, had reached with a ringing, one-out double that caromed high off the Green Monster in left field.

Talk about omens: Scoring first has been a steady indicator of success for Boston this postseason. The Red Sox entered 8-0 this October when that happens.