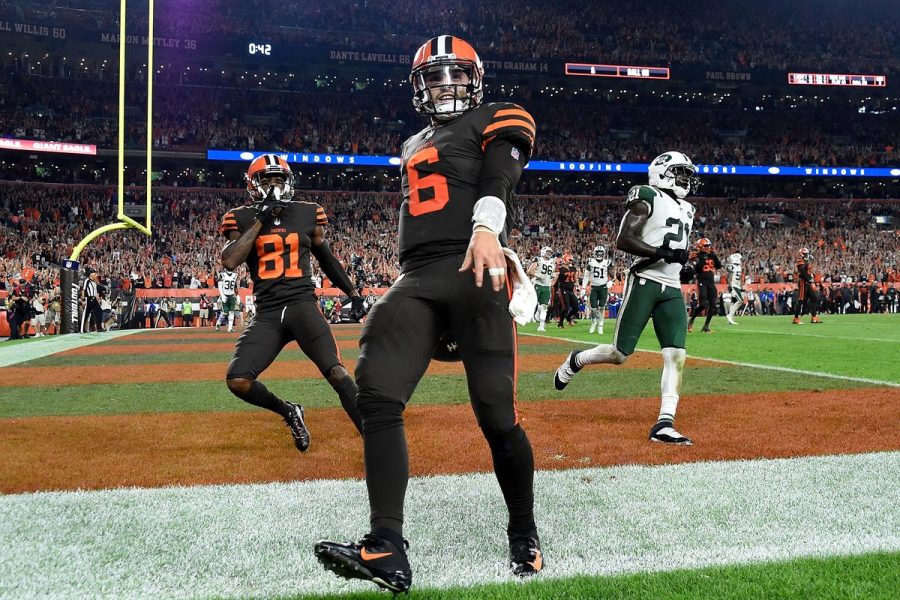 Cleveland Browns franchise Quarterback, Baker Mayfield, is currently 1-3 as a starter. Tyrod Taylor started the season’s first 3 games but was hurt in his 3rd game of the season against the New York Jets.

So then came Cleveland’s new “Pretty Boy” for the next decade, Baker Mayfield.

As Mayfield took over the game for the injured Taylor, he showed no signs of nervousness, and he came to the game ready to play, most importantly, he came ready to win.

The Browns entered the game with a smart and aggressive veteran in Tyrod Taylor. They now take the field with a rookie quarterback that has not much NFL experience.

A little scary for a head coach that hadn’t won this season, and only had 1 win i the past 2 seasons.

Coach Hue Jackson felt comfortable with Baker. I mean, you kind of have to considering he was the #1 overall pick in the 2018 draft.

When Taylor was in, the Jets were disrupting the pocket, and causing havoc on the outside edge. They simply looked like they wanted it more than a team that had yet to win more than twice in 3 seasons. Taylor was doing well with what his team gave him but next thing you know, Taylor dropped back into the pocket, and Linebacker Avery Williamson wrapped him up almost untouched and Taylor fell awkwardly on his head.

Tyrod Taylor was diagnosed with a concussion and was done for the game.

Mayfield stepped up as a young leader and got his team to step up for him and help win a game. The Browns were down 14-0 at the time and there was a little under 3 minutes left in the first half. Baker started his career in the two-minute-drill offense. The rookie quarterback aggressively marched down the field as he was stripped once (Recovered by Left Guard Joel Michael Bitonio), and almost threw his first career interception in the first 2 minutes of his career. Instead, he moved the chains and got 3 big points for his shut-out squad.

Entering the second half, Baker and the Browns were hungry for a win in front of their home crowd.

Mayfield lit the spark and had an immediate impact of the game as you could just feel the momentum changing after Mayfield rushed out of the pocket, avoided a sack, and then made a 12 yard pass-and-catch to new Jacksonville Jaguars’ RB Carlos Hyde.

The defense was on top of things too as they turned the ball over with a strip from rookie cornerback Denzel Ward and gave Baker Mayfield beautiful field position as they took over at the 7 yard line.

The Browns defense was helped by the offense, so he helped his defense and almost threw an interception in the redzone!

All rookies make mistakes. Baker got lucky, and the Browns got a field goal. 14-6 Jets lead it in the 3rd quarter.

Mayfield started to get comfortable and began to heat up. Luckily, his #1 wide receiver Jarvis Landry did as well and tehy connected for 2 passes in a row, one catch putting them at the 3 yard line.

Mayfield then handed the ball off to Hyde who ran it in for the score.

The Browns were losing by 2 points after the score and Coach Hue Jackson knows they have nothing to lose and with the way the game was going, there was no way they would just kick the extra point and move on.

As the Browns line up for the snap, Mayfield wasn’t at the quarterback position and they snapped it almost immediately. This resulted in another Philly Special type of deal with the “pretty boy” Baker Mayfield catching the game tying 2-point conversion with 42 seconds left in the 3rd.

Other rookie quarterback Sam Darnold has himself his own 2-minute-drill and drove down the field and came out with 3 points.

Was it enough to stop Baker Mayfield and the Browns?

Mayfield started his drive on the 25 and ended in the opposing endzone with a 75-yard drive to possibly win the game. That is what you want from a #1 overall pick and the Browns got exactly what they wanted from Mayfield.

With 1:21 left in the 4th quarter, Sam Darnold threw an interception to Joe Schobert which sealed the game for the Browns for the first time this season.

Now, in week 8, why am I just explaining a week 3 game that’s in the books. Yes I understand, but this game by Baker Mayfield was so underrated and nobody really understands the things he did in that game.

Here’s What Baker Mayfield Did in The Game Against the Jets:

What else could you ask from a rookie with the franchise in his hands? Not much more.

Baker Mayfield’s “Cinderella Story” was one for the ages and he can obviously run an offense efficiently and win football games for his club now and in the future.