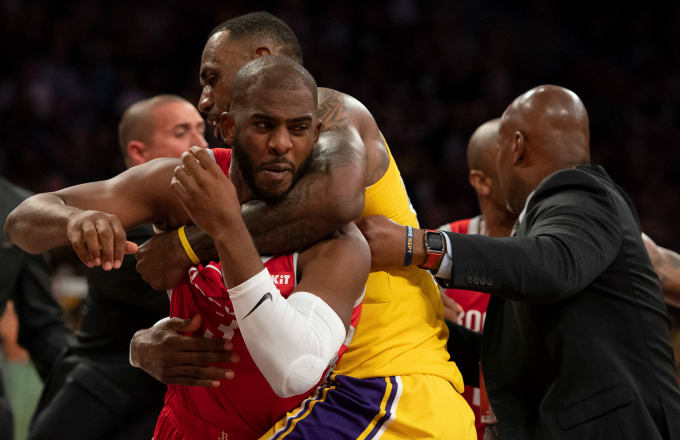 Rockets’ Chris Paul is restrained during the brawl between the Rockets and Lakers in the 4th quarter as the Rockets would go on to win 124-115.

We knew the rivalry between the Houston Rockets and the Los Angeles Lakers would be intense this season, however, few anticipated an all-out fistfight like the one that went down on Saturday night at Staples Center. The altercation first seemed to begin as a heated vocal exchange in the 4th quarter, which then quickly escalated as the Lakers’ Rajon Rondo allegedly spit on Rockets’ Chris Paul, as punches were thrown in a matter of seconds. As a result of the brawl, the league is handing out multi-game suspensions to the players involved. The Lakers’ Brandon Ingram has been hit with a 4-game suspension for inciting the incident and swinging at Chris Paul. Chris Paul too will face a suspension, albeit only 2 games for retaliating against Rajon Rondo. Rondo of the Lakers will get 3 games, for throwing punches and spitting on Chris Paul. The Rockets got the last laugh with a 124-115 win, and the next game between these two now-heated rivals will take place on December 13th in Houston. And I would highly doubt that the tensions will have ceased in the slightest.