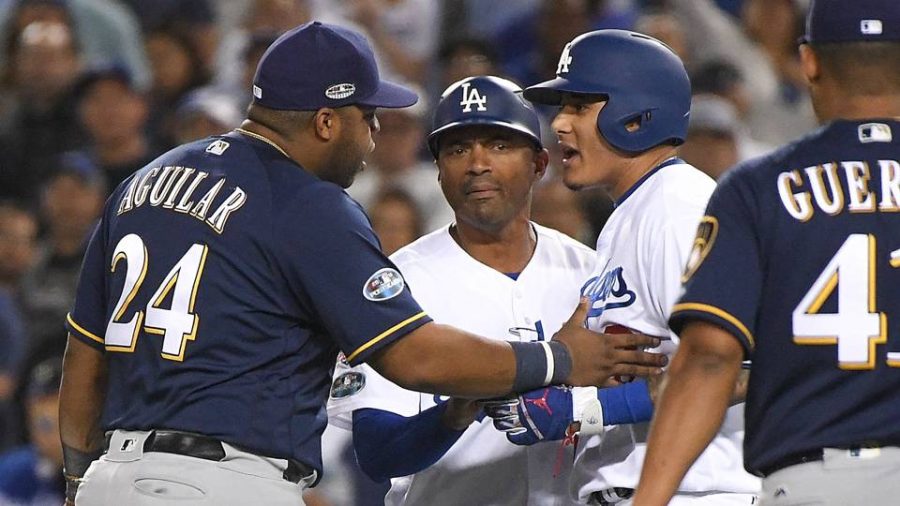 The Los Angeles Dodgers’ trade deadline prize, shortstop Manny Machado, has taken some heat following a handful of controversial plays in the National League Championship Series against the Milwaukee Brewers. The tipping point came in game 4 of the series on Tuesday night, when Machado seemed to deliberately kick Brewers’ 1st baseman Jesus Aguilar in the leg as he crossed 1st base. Several members of the Brewers took exception, especially center fielder Christian Yelich, as this wasn’t Machado’s first controversial play of the series.  In game 3 0f the series, Machado seemed to attempt to take-out Brewers’ 2nd baseman Orlando Arcia by sliding right into Arcia, causing him to fall and fail to convert the double-play. Although the replay-review ruled that Machado didn’t interfere, many around baseball still disagree. The comments in defense of Machado simply claim that he was hustling. However, he was already in hot water with fans after a lack of hustle to 1st base in the series also drew criticism. So, is it just that Machado is hustling, or is he just playing dirty? Machado surely eliminated the possibility of hustle, claiming that hustling is “not my cup of tea,” after being criticized for not going 100%. There are no other explanations for his actions, Machado is playing dirty this postseason. And the Dodgers don’t seem to have a problem with that.