“College is more about learning who you are as a person … than anything else.” 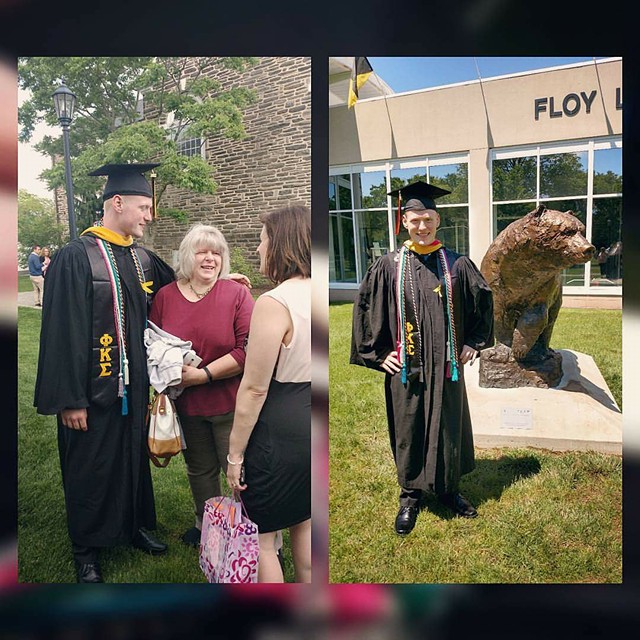 Sean Gregory, graduating from Ursinus College as the class of 2017. He graduated from Boyertown in 2013 and plans to go to grad school in the near future.

What do you wish you knew about college in high school?

Say this is beginning-of-senior-year Sean. I would’ve told him to not get into any high school relationship or anything and just go to college completely independent; go without any attachments. Don’t worry about your friendships, don’t worry about keeping contact with people you’re not gonna really care about anymore. At the end of the day, the people that I was friends with from high school in college are the people I was going be friends with anyways, no matter how much effort I put into it. My freshman year, I realized everyone here is coming in with the same exact mindset as you. Most people are coming into college without any friends, without any connections. Also, avoid buying textbooks if you can. You can usually find PDFs online for free — it may be illegal, but it’s cheap.

What matters from high school?

My senior year, I was an administrative fellow, which means I got to interview incoming freshmen or people that were applying. I think the most important thing to me and to the administration at Ursinus was how well-rounded you are and how well-adjusted you are. A well-rounded person, to me, is just someone who shows interest in multiple things, not someone who excels at everything.

ROTC gave me a sense of discipline. It gave me confidence, which I think I desperately needed going into college. I think drama club and musicals and singing helped me because they got me used to putting myself out there, and that was extremely valuable to me. I don’t think I would’ve been able to adjust as well without those things.

How did you choose Ursinus?

I visited on a weekend during my senior year at BASH. It was my first experience seeing college life outside of a tour or outside of postcards. Everyone I met at Ursinus was super friendly. It was a really, really welcoming atmosphere, which I thought was one of the coolest things. I never really felt as welcomed anywhere else I’ve ever been. I applied shortly after that.

Ursinus also gave me more money than Drexel did. What cemented my decision was actually the class sizes. At Drexel, the class sizes are very large with over 13,000 students attending the university — compared to Ursinus, a college of 1,500 students. At Ursinus, they focus less on academics and more on character when admitting students.

How did you pay for college?

I think I owe $30,000 in student loans right now. Somewhere between $30,000-$40,000 total, which relative to any other private school is really low, so I’m thankful for that. Compared to any other state school, it’s average.

How did you choose your major?

At Ursinus, everyone goes in undeclared. I declared my major at the very end of my first freshman semester, as soon as I could. I went into college wanting to either major in physics or chemistry. I compromised with a physics major and a chem minor. But then after taking a few physics classes, I was like, okay, physics is going to be a lot of work, I don’t know if I want a chemistry minor. But physics overlaps a lot with math. Eventually I was like, alright, might as well just be a math major too, cause I was halfway there.

How was the adjustment to college life socially?

Generally you can count on having a couple of parties to go to every Friday or Saturday. But they’re usually pretty calm; they’re not like the movie Animal House where people are going out, crazy, breaking stuff and driving cars around. It’s usually just people listening to music in a room and dancing and having some drinks here and there.

My advice is count your drinks, keep an eye on them, and drink Gatorade on the weekends.

I spent three of my four years at Ursinus as an RA. Resident advisors, or RAs, are meant to resolve issues in your dorm hall. They’re student workers who are usually a year older than the students they’re assigned to. It’s a lot nicer, in my eyes, to go to an RA for help than administration. At the end of the day, they understand the issue more. We’re glorified babysitters, basically.

How was the adjustment to college life academically?

After freshman year, classes become a lot more personalized and detail-oriented to the major you choose. It’s a lot easier to fall behind because if you’re not keeping up, then you’re going to miss a lot of important information that’s never going to be touched again. Once you’re done with a section, you’re never going to relearn that section. It’s on you to relearn it. If the professor isn’t interested, the students have a hard time being interested too. Go to class, unless the class is pointless and you can do it without going to class, whatever, you do you. But I recommend going to class as much as possible, taking as detailed notes as possible.

I recommend to research what professors you’re going be taking and research before you sign up for a class.

What’s the point of college?

I think college is more about learning who you are as a person and what your values are and understanding the world and how you fit into it better than anything else. If you’re going to college and all you’re doing is learning your field, you’re not doing it correctly. Some people come out of college the exact same as they were in high school, or they come out of college with the wrong ideas of how the world works and the wrong ideas of what people should act like. And that’s sad to me. Those are the people that you see not succeeding in life. I don’t mean succeeding as in making a ton of money and being a CEO or whatever. Anyone can do that, and I’m sure there’s plenty of people who are not well-adjusted and are CEOs and Presidents. I mean succeeding in life in that you’re happy.