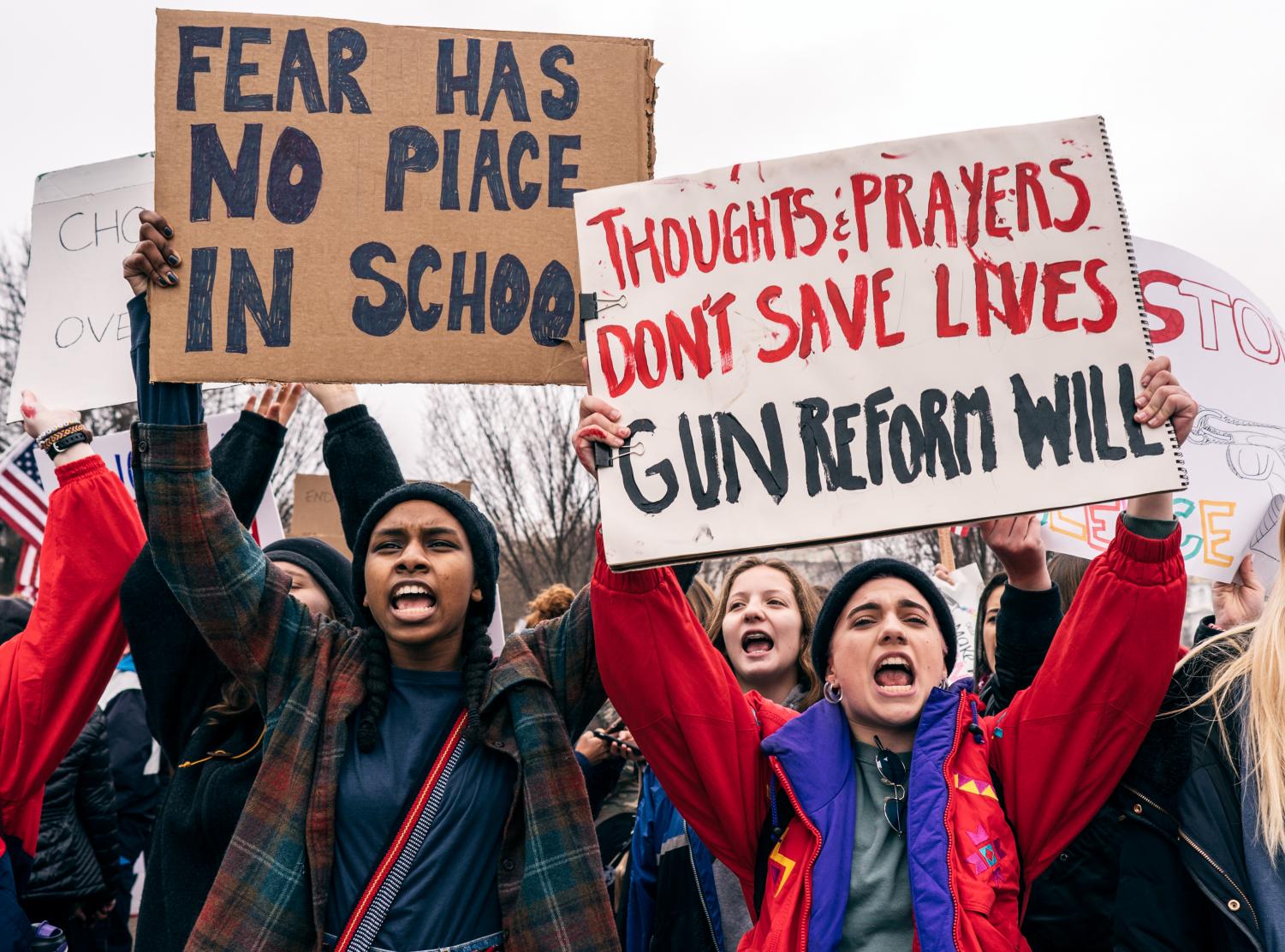 Once a month, our school has a routine fire drill. Students hear an alarm start blaring and are supposed to calmly file out of the classroom, down the hall and outside. Often, students welcome these drills as a break from class to walk out into the warm weather with their friends.

However, the most recent fire drill — a few days after the Parkland school shooting where 17 students were gunned down by a former student with a semi-automatic gun who had lured students out of classrooms by setting off a fire alarm — was anything but routine.

Instead of students’ first reaction being excitement at getting out of class, the primary emotion for many was fear.

“I get scared every time we have one of those drills,” Junior Brendan Hannum said.

This is the new reality for teenagers at high schools across the country today. They are scared about going to school everyday, not sure if they will be safe. This feeling has been slowly but surely building since Columbine nearly two decades ago, and is now at a boiling point. Students’ insecurity is due to legislative inaction, and something must finally be done.

In the short term, the government should give schools money to take immediate action to make them more secure. For one, they can install metal detectors. Many Center City schools already utilize these devices. They can be stationary or wands held by officers. Schools also could increase security by installing bullet proof glass and locks on classroom doors that lock from the inside. This way, in the event of an emergency, teachers would quickly be able to secure students into protected rooms. They also can expand the scanner system teachers use to get into the building to students, so they have to swipe IDs to get into schools.

However, to keep schools from becoming total prison-like environments, we must also try for long-term solutions that get at the root of the gun violence problem.

Other countries, after experiencing mass shootings, have passed legislation that have prevented and lessened the amount of gun violence.

According to pbs.org, after a shooting at a Montreal engineering school, Canada imposed the following:

In Australia, after 35 people were killed in a shooting, nearly two weeks later, the government passed new legislation as well, including:

So what is taking the U.S. so long?

Some fear any action by the government will lead to a total gun ban and therefore violate Second Amendment rights. For those who oppose an overall ban, what’s wrong with changing the age limit from 18 to 21 for purchasing a gun? Also, getting rid of semi-automatic weapons, as Democrats in the House of Representative have proposed, would still allow lawful citizens to own certain guns needed for hunting and self-defense. Tightening background checks and addressing mental illness are also key to ending gun violence.

In a nation where nearly 12 shootings in schools have occurred so far this year, something needs to be done.

‘Enough is Enough!’: Speak up for Gun Control

These have become familiar phrases in the last few weeks due to activism by survivors of the Parkland, Florida, shooting.

It’s time that students across the country join in the activism. Legislators will only take action that they should have decades ago to end gun violence if our generation acts now. As Emma Gonzalez, a student at Parkland High School said at a rally the day after the shooting that left 17 dead and 14 injured: “They say no laws could have been able to prevent the hundreds of senseless tragedies that have occurred. We call BS!”

Since the Sandy Hook shooting in 2012, there have been 1,607 mass shootings in the U.S., but even with all of these tragedies, there still has not been much action from state legislatures or the national government.

Only when teenagers — the victims of these shootings — started speaking up, did lawmakers actually start doing something. Two potential bills are finally circulating in the U.S Senate — one that would tighten background checks and another that would increase the age someone could buy a rifle. Also, Donald Trump proposed a ban on bump stocks, which increase a gun’s rate of fire.

What can you do to keep the momentum going?

Read news articles and watch videos to learn about what’s going on. Learn about how Congress is not doing anything about gun control, learn about what big companies, such as Walmart and Dick’s Sporting Goods, are doing to prevent gun violence, learn about the upcoming marches and walkouts, and learn about how other companies are boycotting the National Rifle Association (NRA). Keep up with the news and stay informed.

Tell others about Congress’ inaction and the NRA boycott. Inform others who are able to vote in the November midterm election. Tell others about the marches and walkouts, and how they can get involved. Talk in person and spread the word on social media about the news or upcoming events.

One of the biggest events planned is on March 24th. Survivors of the shooting are organizing the “March For Our Lives” in Washington D.C., where students will be called to stand up and take action.

Also, Women’s March organizers are planning several school walkouts on March 14th and April 20th. With the upcoming marches and walkouts, be involved and participate if you can. Remember the dates and encourage others to join you.

As Emma Gonzalez said in a Bazaar article, “We are speaking up for those who don’t have anyone listening to them, for those who can’t talk about is just yet, and for those who will never speak again. We are grieving, we are furious, and we are using our words fiercely and desperately because that’s the only thing standing between us and this happening again.”