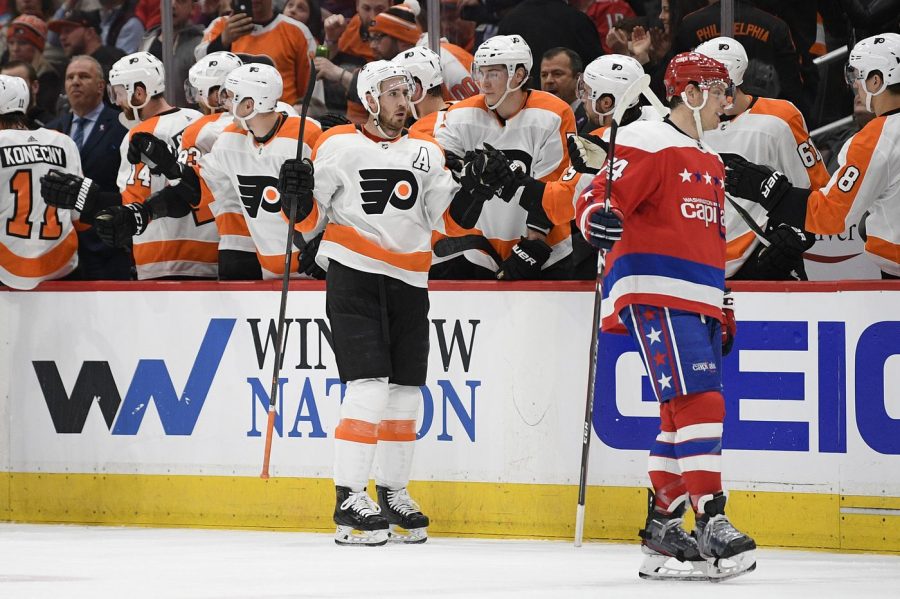 Kevin Hayes’ scored his 23rd goal of the season as the Flyers beat the Capitals 5-2 on Wednesday (via The Philadelphia Inquirer).

The Flyers are taking the league by storm, and solidified their status as a major contender with a huge 5-2 win over the 1st-place Capitals on Wednesday, extending their win streak to 7 in a row, their longest streak of the season. With the win, the Flyers move to just 1 point shy of the Capitals for 1st place in the Metropolitan Division.

Every game between the Capitals and Flyers is competitive as a Metro-Division rivalry, but Wednesday’s matchup may have been the most crucial matchup this season. The Capitals came into the game in 1st place in the Metro, holding a 3 point lead over the 2nd place Flyers. With a win, they could extend their division lead to 5 points, but a loss would cut the lead to just 1. And the Flyers made sure the Capitals wouldn’t run away.

The Capitals struck first in a heated 1st period, as Lars Eller scored 14 minutes into the period. Both defenses started strong, with both the Capitals and Flyers allowing just 7 shots on goal. While the Flyers couldn’t muster much offense, the story changed entirely in the 2nd period. The Flyers poured it on with 18 shots on goal, 3 of them getting past Capitals’ goalie Braden Holtby. Travis Konecny stayed hot, putting the Flyers on the board with a power-play goal, his 24th of the season. Kevin Hayes stayed hot too, scoring 7 minutes later to make it a 2-1 Flyers lead with his 23rd goal of the year. Tyler Pitlick then made it a 3-1 game a few minutes later with his 8th goal of the year to cap the 2nd period onslaught. The Capitals did cut in to some of the Flyers’ momentum about a minute later, as Garnet Hathaway cut the Flyers’ lead to 3-2 to end the 2nd period.

The Flyers knew they couldn’t take their foot off the gas against a team like the Capitals, so they simply kept the pedal to the metal. Ivan Provorov got Philly their 2-goal lead back with his 12th goal of the season 6 minutes into the final period. The Capitals actually dominated the Flyers in terms of offensive-zone presence in the 3rd, racking up a 12-4 shots-on-goal advantage. However, Brian Elliot stood tall for the Flyers, stopping every shot the Capitals threw at him in the period. Meanwhile, Scott Laughton added some insurance on the other end of the ice, giving the Flyers a 5-2 lead with his 13th goal of the year. The 5-2 lead would stand to the final horn, as the Flyers dominated the Capitals yet again.

Brian Elliot got the start in-goal, facing 27 shots and making 25 saves. Making the start in Washington gives Hart a game off before starting against the Hurricanes as the Flyers play back-to-back games.

The Flyers are easily one of the most dangerous teams in the league now. 7 in a row, 6th in the league in points overall, 1 point behind Washington for 1st in the Metro, and 8-2 in their last 10 games. They’ll look to make it 8 in row Thursday night against the division rival Hurricanes. If they win, they can potentially take 1st in the Metro, but it all depends on the Capitals’ game against the Rangers Thursday as well.