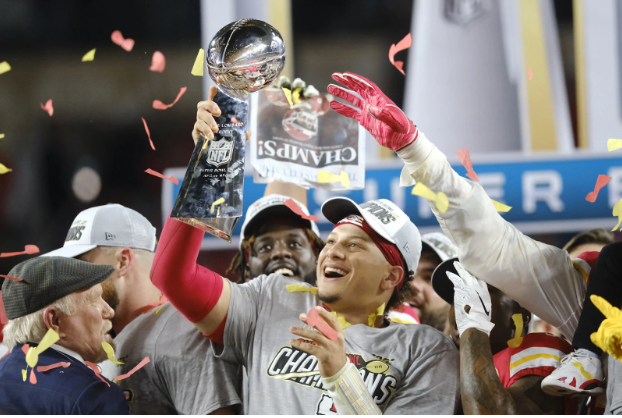 Patrick Mahomes became the youngest NFL Superbowl MVP. But how did he get here?

Patrick Mahomes: beyond the victory

Patrick Mahomes led the Chiefs to victory over the San Francisco 49ers on Sunday February 2, in a score of 31-20.

Mahomes, now the youngest quarterback in the NFL to win Superbowl MVP at the age of 24, was one of the key components to the game.

He finished the game with 26-of-42 for 286 passing yards and two passing touchdowns, adding 29 rushing yards and a score on the ground. But how did he get here?

At Texas Tech University, Mahomes enjoyed a fruitful football career, where in his junior year he led all NCAA Division I Football Subdivision players in multiple categories. Son of baseball pitcher Pat Mahomes, he quit baseball at the beginning of his junior year to focus on football.

His Junior year he finished with a record of 41 passing touchdowns with 5,052 yards out of 12 games participated. As a result, he won the Sammy Baugh Trophy, awarded each year to the country’s top collegiate passer. He was also named an Academic All-American 2nd Team.

Throughout the course of his college football record, he ended with a total of 93 passing touchdowns and 11,252 yards in 32 total games participated. After his junior year, he immediately entered the NFL draft, with analysts projecting him as a first or second round pick.

He left Texas Tech University and joined the NFL in 2017, when he was signed to the Chiefs as their 10th draft pick in the first round. In a fully guaranteed four-year, $16.42 million contract that included a signing bonus of $10.08 million, Mahomes committed. He has not signed any extension even though there are rumors going around for a contract worth $200 million.

In his rookie year, he helped bring the team to a 27-24 victory against the Denver Broncos, completing the game with 22 completed passes and 284 yards without interception.

His second season, he was upgraded to a starting quarterback, beating division rival LA Chargers in his first game to a score of 38-28. For this win, he was named AFC Offensive Player of the Week, coming out of the game with 256 yards and 4 touchdowns without interception.

A record was passed in his second game as starter, where he broke the NFL records for most touchdown passes through a quarterback’s first three career games as well as the record for touchdown passes thrown in the first two weeks of the season. His performance against the Pittsburgh Steelers gave him his second AFC Offensive Player of the Week in a row, making him the first quarterback since Tom Brady to start a season with back-to-back awards.

We will see where Mahomes goes once he is an unrestricted free agent. He just finished his 3rd season and is now about to head into his 4th season in the NFL.

In his 2019-2020 season he finished the season with 26 touchdowns, 5 interceptions, 4,031 yards, and a total rating of 105.3. He is definitely the future for the Kansas City Chiefs and the entire NFL franchise.