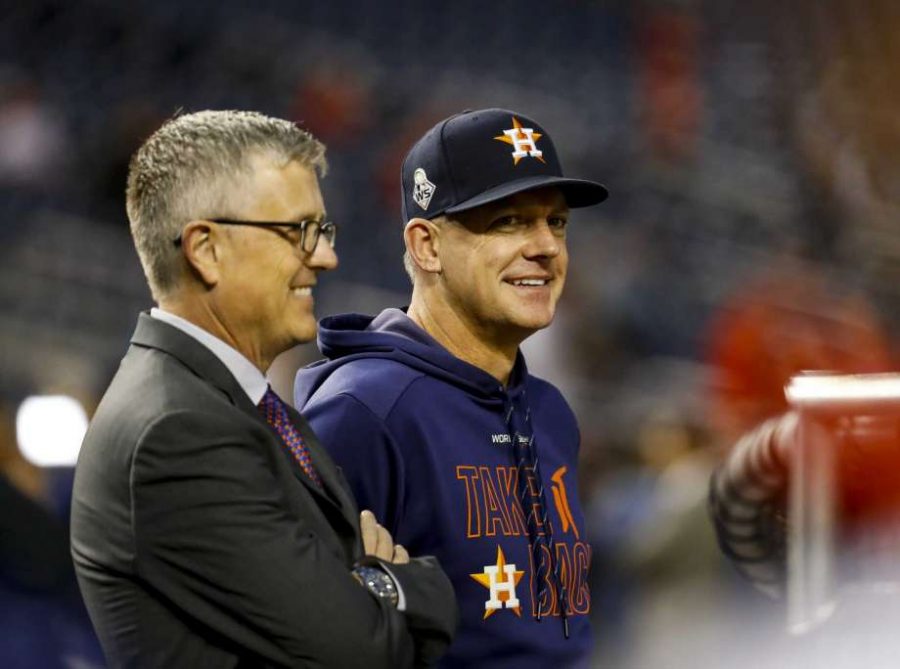 The Houston Astros’ general manager Jeff Lunhow and manager AJ Hinch were fired by the team on Monday following their announced suspensions by the MLB for the 2020 season as a result of their involvement in the ongoing sign-stealing scandal investigation.

Houston Asterisks: What to make of the sign-stealing scandal

Since the end of the 2019 season, the MLB world has been buzzing about the Astros’ sign-stealing habits after being revealed by former Astros pitcher Mike Fiers back in November. The investigation and punishments have come into full effect in the last week. Here’s what we know, and what to expect once the dust settles.

According to investigations and Mike Fiers’ public statement in November, the Astros have been practicing sign-stealing tactics since 2017. It’s no longer a coincidence that they won the franchise’s first World Series title in the same season the tactics allegedly began.

The sign stealing is far from simple, as the Astros reportedly had a camera in center field, which could be viewed by a monitor in the clubhouse. From there, the signs would be relayed to the batter by a noise: specifically, banging on a trash can, or whistling. The noise was used to indicate an offspeed pitch had been called by the catcher, no noise meant fastball. This, obviously, gave Astros batters a signifcant advantage. But only at home. During away games, the numbers show a significant drop that can’t simple be credited to “home field advantage.” As further proof, there have been instances when pitchers & catchers have changed their signs mid-game, or even mid-at-bat. The result of changing the sign for an offspeed pitch results in no noise from the Astros’ dugout, and a confused Astros’ batter, almost every time.

The Red Sox and their manager Alex Cora mutually agreed to part ways on Tuesday amid the investigations that the Red Sox too stole signs. Cora, at one time, was part of the Astros’ staff, and reportedly has been linked to the sign-stealing scheme. The mutual agreement to part ways just a day after Hinch and Lunhow were fired and suspended certainly raises significant suspicions.

The whole ordeal continues to worsen the black eye already on the Astros organization, as their assistant general manager was fired in October as a result of verbally attacking several female reporters. Now, their last two pennants in 2017 and 2019 feel tainted. Hinch and Lunhow have been suspended and fired. The Astros have lost their 1st and 2nd round draft picks for the next two drafts. And they’ve been hit with a $5 million fine, the maximum the MLB can demand.

However, it is important to note that no Astros players were punished in any way.

The investigation is still far from over, as now we find out if the Red Sox too were involved, which we have legitimate reason to believe they were. If so, 2 of the last 3 World Series champion teams now have an asterisk by their names. It’s a bad look for both organizations, and a bad look for baseball.