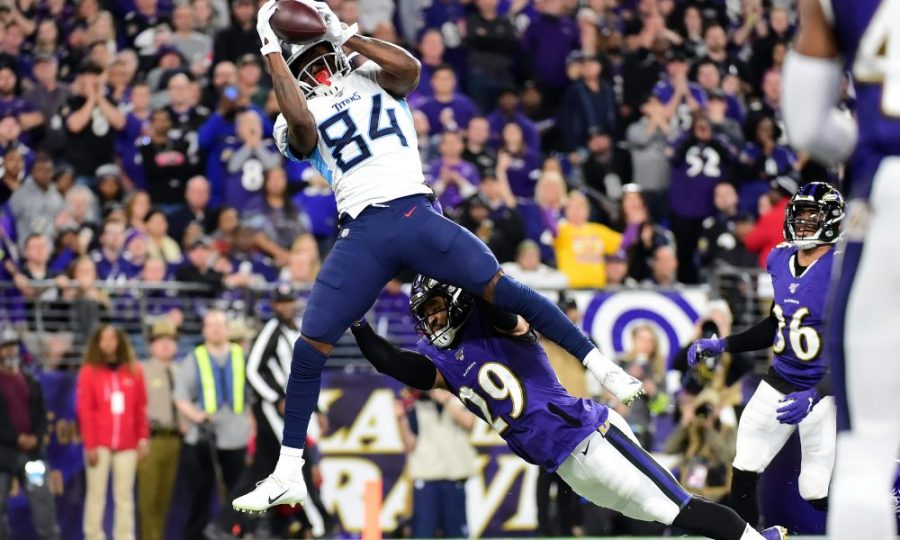 Titans continue to defy the odds; Move on to AFC Championship

At 9-7 in the regular season, and the 2nd wild card in the AFC, nothing about the Titans, on paper, seems especially outstanding, except Derrick Henry, of course. But regardless, on paper, the Titans really shouldn’t be here. But they are. After taking down the defending champion New England Patriots and Tom Brady last week, and eliminating the Super Bowl favorite Baltimore Ravens and Lamar Jackson, the Titans have now cemented themselves as a legitimate threat in the AFC playoff race, and potentially, the Super Bowl.

Saturday’s AFC divisional round matchup pitted the underdog Tennessee Titans, led by revived QB Ryan Tannehill and the NFL rushing leader Derrick Henry, against the powerhouse Baltimore Ravens, led almost solely by MVP candidate and 2nd-year superstar Lamar Jackson. The Titans found themselves as the 2nd wild card team in the AFC, thanks to a timely hot streak and a late season collapse by the Pittsburgh Steelers. But besides the stellar play of Derrick Henry almost singlehandedly carrying them, there’s nothing especially stand-out about the Titans. Meanwhile the Ravens are all about being standout. They absolutely steamrolled the regular season, finishing 14-2 with the best record in the NFL. They wrapped up their season with a 12-game win streak, with their last loss coming against the Cleveland Browns in week 4 on September 29th. Any team that played the Ravens was an underdog to some degree, and pitting a 14-2 team vs a 9-7 team seems borderline unfair. But as they proved in the AFC wild card game, the Titans aren’t interested in the odds.

The 1st quarter was pretty uneventful to say the least, with Tennessee’s 12-yard touchdown to Jonnu Smith being the only scoring for either side. You knew it wasn’t going to be like that all game, either Lamar Jackson or Derrick Henry couldn’t be kept down for long. And yet somehow, they were for another quarter. Titan’s QB Ryan Tannehill connected with Kalif Raymond for his 2nd passing TD of the night, which is easily not what anyone expected. If Tannehill was having this strong of a start in the passing game, when the Titans’ usual strategy is to hand-off to Derrick Henry, it was clear the Ravens might be in trouble. But again, could Lamar Jackson really be kept down for that long? Baltimore would make 2 field goals before halftime, to make it a 14-6 game, but the key players were still scoreless.

Things were already bad for the Ravens going into halftime, and somehow, they got even worse in the 3rd quarter. On a trick play by the Titans, leading rusher Derrick Henry got the ball – and then threw a 3-yard touchdown pass to Corey Davis. Just 2 minutes after the trick play, Ryan Tannehill scored a 1-yard rushing touchdown himself. And yet, Lamar Jackson on the opposite sideline, had yet to lead a touchdown drive let alone score himself.

The 4th quarter finally saw Jackson score, as he successfully connected with Hayden Hurst for a 15 yard touchdown, to make it 28-12, which would be the final score as the Titans shocked the Ravens in Baltimore.

Despite not having a rushing touchdown, Derrick Henry still had himself a nice night, rushing for 195 yards on 30 carries. Ryan Tannehill finished with 3 touchdowns, 2 passing and 1 rushing, with no interceptions.

For the Ravens, looking at Lamar Jackson’s statline is brutal. A QB known for mobility and rushing, he attempted 59 passes, connecting on 31 of them, while throwing 1 touchdown and 2 interceptions, for a passer rating of just 63.2. It’s not like he didn’t rush at all though, as he still racked up 143 rushing yards. But still, it’s easy to tell by the numbers that the Titans successfully got the Ravens off their gameplan, and it worked.

For the Titans, they’ll look to face either the Kansas City Chiefs, or the Houston Texans. Meanwhile in Baltimore, a star-studded and Super Bowl favorite season, goes to waste.