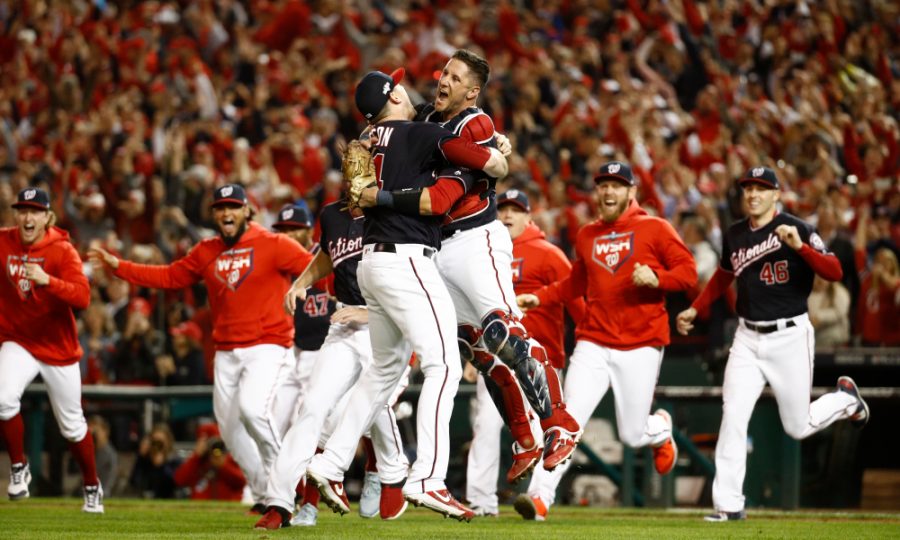 Nationals Sweep Their Way To The World Series

For the first time in history, the Washington Nationals are World Series bound. They clinched their 1st National League pennant in convincing fashion, sweeping the St. Louis Cardinals in 4 games in their first NLCS appearance, punching their ticket to the Fall Classic.

Washington made history in the NLDS, upsetting the heavily-favored Los Angeles Dodgers in a 5-game series to advance to their first-ever NLCS appearance.

Game 1 of the series added to the already-impressive 2019 postseason resume for Anibal Sanchez for Washington, as he flirted with a no-hitter for 7.2 innings. He was removed after allowing the 1 hit, finishing the night with 7.2 IP, 1 hit, 0 runs, 5 strikeouts, and 1 walk. His postseason ERA is an insane 0.71 in 12.2 innings of work. Washington’s Sean Doolittle came in to secure the 4-out save and preserve the shutout, as the Nationals defeated the Cardinals 2-0 in Game 1.

To have one pitcher flirt with a no-hitter in the postseason is impressive. To have two pitchers do it in back-to-back nights, that’s dominant, and that’s exactly what the Nationals got to witness. In Game 2, Max Scherzer put together a gem of his own, throwing exactly 6 innings of no-hit baseball before giving up a hit to open the 7th. Scherzer finished the night with 7.0 innings pitched, 1 hit, 0 runs, 11 strikeouts, and 2 walks. Doolittle, Corbin, and Hudson combined in relief to hold the Cardinals to just 1 run. Michael Taylor’s solo-home run, and Adam Eaton’s 2-RBI double were all the Nationals needed on offense to pull off the 3-1 win to take a 2-0 series lead.

After the series moved to Washington DC, the Nationals only gained more momentum, as they stomped the Cardinals 8-1 in game 3. Once again, the Nationals witnessed another incredible starting pitching performance, as Stephen Strasburg struck out 12 and allowed 1 run on 7 hits over 7 innings pitched. Not a no-hitter, but dominant nonetheless. Meanwhile the Nationals offense jumped all over St. Louis’ ace Jack Flaherty, roughing him up for 4 runs on 5 hits in just 4 innings. Out of all 8 runs, only 1 came on a home run, a solo-homer by Victor Robles in the 6th inning. The timely hitting and small-ball strategies of the Nationals continue to do damage in big ways, while other teams continue to live and die by the home run.

In Game 4, the Nationals made sure everyone knew they wanted to punch their World Series ticket right now, as they jumped to a 7-0 lead in the 1st inning. Once again, all 7 runs came on timely hitting, as the Nationals didn’t hit a single ball over the fence in the 7-run outburst. Nationals’ starter Patrick Corbin continued the Nats’ dominant pitching trend, as he struck out 12 batters in just 5 innings. He did allow 4 runs on 4 hits, but his first 3 innings especially were pure dominance. In the end, Daniel Hudson made the 4-out save to secure the win, and in turn, punched the Nationals’ ticket to the World Series for the first time in franchise history.

The story of the 2019 Nationals is an incredible one, regardless of what happens next. At one point in May, the team sat at 19-31, with just a 0.1% chance to win the World Series. They’ve played underdog all year. Taking down the Brewers in the Wild Card game. Upsetting the 106-win Dodgers in the NLDS. Now, they’ve swept the Cardinals to make it all the way to the World Series, something the franchise hasn’t done in 86 years of existence, dating back to their days as the Montreal Expos. They’ve got one more test to pass, and we’ll have to wait to see who will stand in their way.