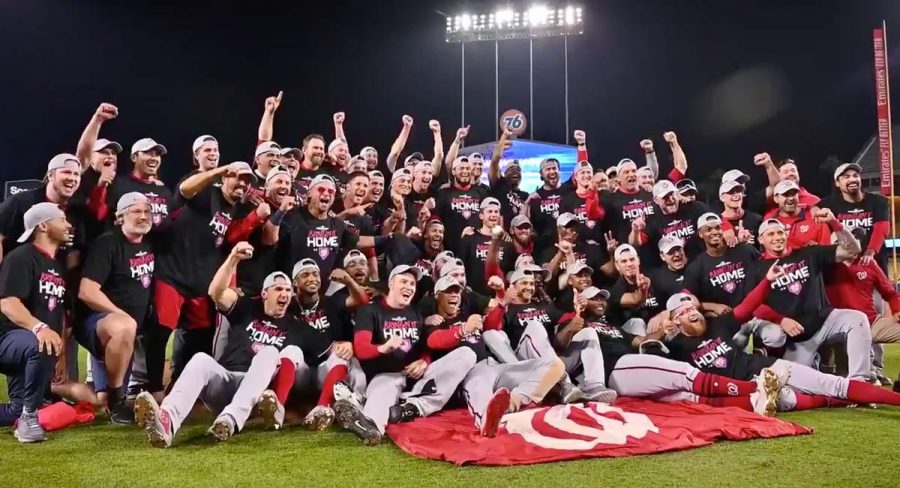 The Washington Nationals advanced to their first franchise NLCS over the Los Angeles Dodgers in dramatic fashion on Wednesday night.

In maybe one of the most surprising storylines of the MLB postseason so far, the Washington Nationals pulled off the NLDS upset of the Los Angeles Dodgers to advance to the NLCS vs the St. Louis Cardinals.

In Game 1 of the series, the Dodgers proved they were the best team in the National League, as Walker Buehler and the Dodgers shut down the Nationals 6-0. Both starters in the game were fantastic, as Buehler allowed just 1 hit in 6 innings, while the Nationals’ Patrick Corbin allowed 2 runs on 3 hits in 6 innings pitched. Max Muncy had a big night at the plate to power the Dodgers’ offense, going 2 for 3 with 3 RBI and a stolen base.

The Nationals flipped the script in game 2, riding a strong start from Stephen Strasburg and timely hitting, as the Nats took game 2 over the Dodgers 4-2. The Nats won game 2 with the small-ball approach, as 3 of the 4 runs were scored on RBI singles. They managed to tag Clayton Kershaw for 3 runs on 6 hits in 6 innings. Despite the loss, Max Muncy continued his strong NLDS showing with another homer in the 7th inning.

After a day off for travel, the Dodgers showed up in Washington DC to do damage, as they put up 10 runs on the Nationals to win game 3 by a final of 10-4. Nationals’ Patrick Corbin got absolutely smoked, allowing 6 runs on 4 hits in just 0.2 innings after coming into the game in relief of Anibal Sanchez, who looked great in the start. Max Muncy’s dominant series continued, as he homered in his 3rd straight game with a solo homer in the 5th inning to put the Dodgers on the board after they initially trailed 2-0. In the 6th inning, the Dodgers’ bats truly came alive, as Russell Martin and Kike Hernandez hit back-to-back RBI doubles, followed by a 3-run homer by Justin Turner to officially put the game out of reach.

The back-and-forth series continued as the Max Scherzer shut down the Dodgers to allow the Nats to tie the series at 2-2 as the Nationals defeated the Dodgers 6-1. Justin Turner hit a solo home run in the 1st inning, but that would be it for the Dodgers, as Scherzer locked it down to allow just 1 run on 4 hits in 7 innings of work. Anthony Rendon powered the Nationals’ offense, going 1-2 with 3 RBI. Trea Turner played a big role in the Nats’ win as well, going 3-5 with 2 runs scored to set the table for Rendon. The series would now go to a Game 5 in Los Angeles.

The winner-take-all Game 5 in LA would be maybe the most intense games of the postseason so far. Once again, Max Muncy continued to stay hot, as he launched yet another home run to put the Dodgers up 2-0 in the 1st inning. A solo homer by Kike Hernandez would give the Dodgers a 3-0 lead by the end of the 2nd. But unfortunately for LA, 3 would be far from enough. Walker Buehler looked absolutely dominant yet again in the start for the Dodgers, as he allowed just 1 run on 4 hits in 6.2 innings, as he struck out 7. The script would flip, however, once Clayton Kershaw entered the game in relief of Walker Buehler. Kershaw started strong in the 8th inning with a strikeout. The wheels would fall off shortly after, however, as Kershaw gave up back-to-back solo homers to Anthony Rendon and Juan Soto, tying the game at 3-3 in the 8th inning. The 3-3 tie would remain by the end of the 9th, sending game 5 into extra innings. In the top of the 10th inning, Dodgers’ pitcher Joe Kelly issued a walk to Adam Eaton, followed by a double by Rendon, and an intentional walk to Soto, loading the bases with nobody out. On the 2nd pitch of the next at-bat, Nationals’ Howie Kendrick crushed a grand-slam over the center field wall, crushing the hearts of the Dodgers with it. The Dodgers wouldn’t be able to counter in the bottom of the 10th, as they were eliminated by the Nationals, 7-3.

For the Nationals, the Game 5 win is a historic feat. The Nationals have never advanced past the NLDS ever, at least not since they were still the Montreal Expos in 1981. Not only that, but the Nationals were a 93-win wild card team going up against back-to-back National League champions, coming off a 106 win season. For the Dodgers, the Game 5 loss to Washington is just another brutal chapter of the last 3 years especially. The Dodgers have lost back-to-back World Series in 2017 and 2018, only to lose to a Wild Card team in heartbreaking, extra-innings fashion.

The Nationals now move on to face the St. Louis Cardinals in the NLCS, while the Dodgers now have a lot of questions to answer, particularly deciding on whether or not to retain Dave Roberts as manager.