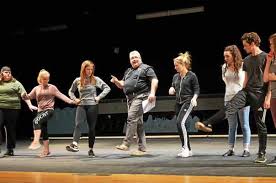 Mr. Didyoung practices “Snoopy!” with students in this year’s musical.

Mr. Didyoung to Retire; Will be Missed by Athletes, Actors

Next school year will bring a new soccer season and a new play, but with a different coach and director — for the first time in more than three decades.

Mr. Scott Didyoung, who has taught English in the district for over 37 years — while also coaching varsity soccer and directing the high school musicals — is retiring this year. The 9th grade English teacher taught at Junior High East before coming to the high school this year when freshmen were added to the building. While he is looking forward to relaxing, he said he will miss a lot about teaching.

“I’m going to miss the connections you make and also seeing the kids learn and grow,” he said. “The hardest thing to walk away from is the kids in the classroom, the soccer players, and the kids in the musical.”

Mr. Didyoung has had over 300 wins as soccer coach, a milestone he reached during the 2015 season, making him the winningest active coach in Berks County at the time.

“I’m going to miss him and I know the rest of the team is going miss him, too,” soccer player Matt Kerr said.

Mr. Didyoung, who grew up in Reading, said his interest in the soccer began in high school.

“I played in the community soccer program and intramural in school,” he said. “My cousins and relatives played; it made me a better athlete and I always loved the tactics of the game.”

Mr. Didyoung’s interest in theater began at an earlier age.

“My 4th grade teacher told me I had to be a woodcutter in one of the plays, and I fell in love with the musicals after that,” he said.

Mr. Didyoung’s arts-loving family also had a big influence on him.  He has always been very close with his parents and his sister.

“My family and I would go to musicals together; they would always be presents,” he said.

He was in plays in high school and college at Kutztown University, where he majored in Communications Education. He also has been in professional performances, but not full time.

“It was hard to make a living,” he said.

Mr. Didyoung, who has directed dozens of plays over the years, said he could not decide on one favorite musical. He said Les Miserable, Phantom of the Opera, Jekyll and Hyde, West Side Story, and Mary Poppins would all be top contenders.

He has especially enjoyed working with students who, like him, were multi-talented and tried different types of activities.

“I had top athletes in the theater,” he said, “and the athletes enjoy the arts too.”

He said he tries to help students understand they can excel in more than one thing.

“I want them to realize that,” he said. “Getting kids to experience their talents is extremely important.”

Senior Casey Flack, who has been in three of the musicals directed by Mr. Didyoung, including his last one, “Snoopy!”, said he has had a big impact on her life.

“He is a very passionate and sincere man,” she said. “He helped me to learn patience and taught everyone in the cast that honesty is the best policy.”

He also could be quirky, she said.

“I will never forget his funny sayings such as, ‘schosh’, ‘wee toddy’, and ‘lookie lookie at Mr. Didyoung’,” she said.

Other students who have had him for class remember “Didyoung Dollars” (extra credit points earned by answering questions) and how Mr. Didyoung would have them repeat “a tutor who tooted a flute” to learn correct pronunciation.

Junior Dylan Robertson, who had Mr. Didyoung for 9th grade English, remembers acting out Romeo and Juliet with fake swords. He also remembers Mr. Didyoung talking in third person when he was not happy about something.

“One time I handed in an essay [that] wasn’t good,” he said, and was told, “‘Mr. Didyoung did not enjoy that very much’.”

In addition to spending more time in retirement with his family, including his parents in California, Mr. Didyoung plans to continue to be involved in learning, soccer and theatre.

“I want to become more educated,” he said. “I want to take classes about Broadway at Villanova. I want to maybe continue coaching somewhere else or at another level.”