Girls of Thrones: Review of Episode 4

Following “The Long Night”, “The Last of the Starks” leaves viewers with a mess. Hearts are broke, a dragon dies, secrets are out and, of course, a significant death sparks The Last War. 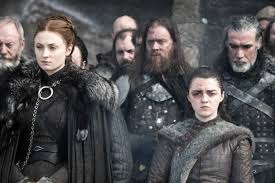 “None of this is totally surprising, but there was a surprise tear jerker.”

Episode 4 started out as expected, with everyone at Winterfell enjoying their victory against the Night King. However, the celebration soon came to an end as many characters had their hearts torn in two. This starts with Gendry proposing to Arya only to be rejected. Then, Jaime and Brienne of Tarth finally get together, but that also gets ruined as Jaime ditches her for Cersei once again. None of this is totally surprising, but there was a surprise tear jerker. The episode ended with Greyworm watching the love of his life, Missandei, be beheaded by The Mountain.

On top of all of this, it is known to many that Jon is actually Aegon Targaryen, son of Lyanna Stark and Rhaegar Targaryen, the late Prince of Dragonstone and heir to the Iron Throne. This messes up everything because his claim is stronger than Daenerys’s. Also, because Daenerys is starting to act crazy, she is rubbing people the wrong way (especially Sansa and Arya). In addition to this, the conversations, such as one held by Varys and Tyrion, so many predictions can be formed???. Some of these include, Daenerys killing Jon, Daenerys being betrayed and killed by her own people, and Jon dying in the Last War and Daenerys becomes queen anyways??. All theories seem ridiculous, but in reality no theory is totally insane because this is Game of Thrones, and anything can happen.

The most recent episode of Game of Thrones left audiences with a shock. Beginning celebratory, it brought an abrupt reawakening back into the real (fake) world of the fight for the iron throne.

The episode begins with everyone celebrating after defeating the Night King in the previous episode. Daenerys, still presumably reeling from the revelation that Jon is actually Aegon Targaryen, calls on Gendry. At first, there was fear she was about to do something drastic and execute him for no reason, as madness runs in the Targaryen family. However, it was a pleasant surprise when Gendry was awarded a Lordship and the property of Storm’s End, as well as named a true son of Robert Baratheon.

There was one other moment of tenseness in the beginning half of the episode: when Jon was surrounded by friends who were saying how kingly he was. The look on Dany’s face as well as the fear of her possible madness brought some to think she was about to kill Jon on the spot. However, she did nothing, and the moment passed without incident.

A majority of the celebrations were spent on relationships; Gendry proposed to Arya, and she turned him down which was very upsetting although true to her character; Jaime and Brienne actually happened, which was extremely surprising and Tormund’s reaction was pretty funny honestly; the Hound and Sansa, although not romantic, had a heart-to-heart in which any possible past resentment was completely resolved; and Jon and Dany. The transition scene, perhaps the shift of the episode, occurred when Daenerys came to Jon’s quarters and pleaded with him to not tell his family about his true heritage, pleaded for them to still be together. Jon refused, and Dany left very angry and hurt which is probably going to contribute greatly to her probable oncoming madness. Jon told Sansa and Arya, and Sansa told Tyrion despite swearing to Jon to not tell another living soul.

Then Daenerys and her army began to go South to King’s Landing. It was a huge shock, literally making me gasp, when Euron appeared out of nowhere with the Iron Fleet and killed one of Dany’s dragons. The ensuing battle (well, the ensuing temporary retreat of Dany’s forces) upset me greatly; especially when Missandei was revealed to be captured.

Varys and Tyrion’s little discussion was nostalgic, bringing the audience back to the beginning of the show when Varys and Littlefinger would have philosophical discussions about the current ruler and the probable outcomes. Varys, I feel, is completely in the right; he’s always rational and he’s always on the side of good morals. Tyrion, however, may be making his first stupid decision of the show, siding entirely with Daenerys.

Daenerys offering peace if Cersei surrendered was relieving, despite the fact that it was obvious it would never work. Cersei executing Missandei, despite Tyrion’s pleas, was heartbreaking. She was the only character that never harmed anyone or did anything awful in the slightest. She was a completely pure character.

The results of this entire ordeal is coming next episode, when Daenerys storms the Red Keep. Greyworm will probably give his life fighting for revenge for Missandei, which is also heartbreaking. Hopefully Cersei dies next episode; there’s no hope for her survival if Daenerys wins anyways. Dany and Jon will probably die before the show ends. Current prevailing theory is Sansa will end up on the throne.