Girls of Thrones: Review of Episode 2

While the premiere of Season 8 brought everyone to Winterfell, Episode 2 set the stage for the rest of the season. The war did not start yet and no deaths occured. Rather, the focus of the episode was on characters saying their final goodbyes. 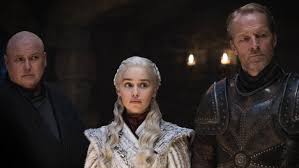 “Despite the lack of shock factor, this episode did contain something never seen before — final goodbyes.

Similar to the premiere, I was fully expecting a huge twist that would shape the rest of the season, but that didn’t happen. Despite the lack of shock factor, this episode did contain something never seen before — final goodbyes. The goodbyes are not obvious, because on the surface they discuss war plans, the past, and the future. But viewers get the “ending” feeling when the bulk of the episode shows every character at Winterfell talking at one point. And then it hits you. This could be the last time you see some (maybe many) of these beloved characters.

As proven in the previous seasons, it is near impossible to predict what will happen next and, in my opinion, this episode did not reveal who is joining the Army of the Dead, if any. The dream of having all characters survive the war is extremely unrealistic. I believe that anyone is fair game, including Sansa Stark, Arya Stark, Brandon Stark and Tyrion Lannister. However, because of the tension  between Jon Snow and Daenerys Targaryen (when Jon told her that he was Aegon Targaryen, son of Lyanna Stark and Rhaegar Targaryen, and heir to the iron throne), I don’t believe either of them will die — at least until their issues are resolved. It would be downright wrong and incredibly sad to see either die with the other angry at them. But I think all fans can agree next episode will be heartbreaking on some level.

Jocelyn Lear is on hiatus this week.