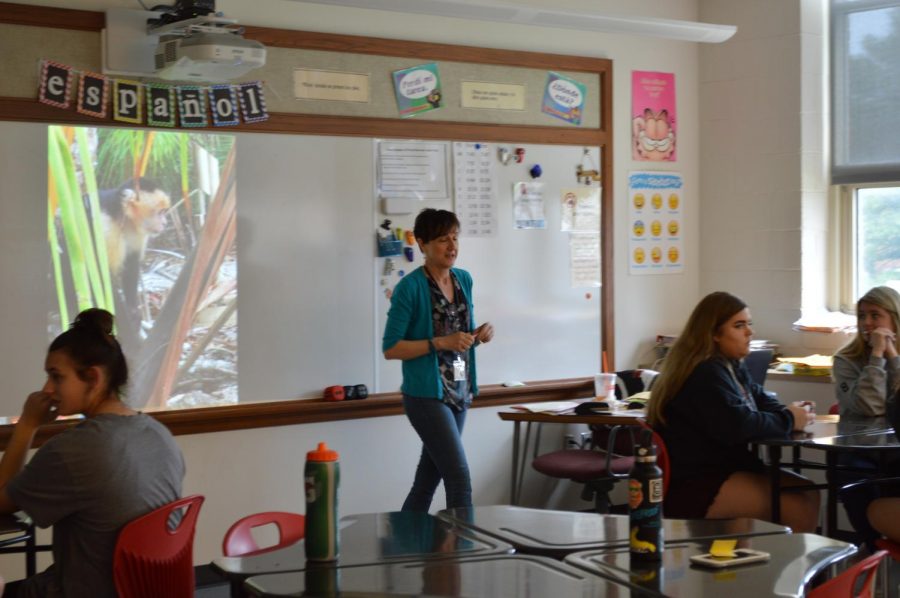 A lot of people wish they had pursued their true passion in life. Mrs. Sandra Beck is someone who actually has.

In her 37th year as a Spanish teacher, she says she liked Spanish in high school, then fell in love with Spain when she took a school trip there. She also thought she would enjoy teaching, so her career path became obvious.

“I feel very lucky to have loved my job for all these years,” she said. “For some people, it is hard to find a job that they love.”

She will be retiring this year. Although she is excited to see what the next chapter holds, she is also sad to leave her teaching career behind.

“I will miss the students the most,” she said. “That is the part that makes leaving so hard for me.”

Mrs. Beck began her teaching journey by attending Millersville University as an undergraduate and later obtained her master’s degree from Kutztown in Spanish education.

She taught Spanish at both Junior High East and West her first year out of college, then spent the following 36 years teaching Spanish 3 and 4 here at the high school.

Because she has had such a long career in the Boyertown district, many of the students she taught are now her colleagues, including Mr. Jeff Kusniez, Mrs. Stephanie Weidger, Mrs. Jennifer Benning, Mr. Daniel Fries, Mrs. Miller, and Mr. Chad Roth.

Mr. Fries was the first former student to come back as a colleague.

“Until I yelled at him, he would not call me by my first name,” she said.

“She is laid back in a good way,” said junior James Sahakian. “We still learn, but we’re not fully stressed out.”

Mrs. Beck says it took her a long time to develop her teaching style.

“Over the years I’ve changed a lot as a teacher,” she said. “You never learn how to teach until you begin to teach.”

She said teenagers are still the same as when she began teacher, but nowadays they seem more distracted.

“There are so many different factors that can interrupt education,” she said.

She makes up a lot of her own games to help students learn, and she also tries to give them tricks and aides to remember things.

“I try to be very flexible,” she said, “even though I have a lesson plan.”

Mrs. Beck said she will miss the funny things her students say and do on class game days, “but one thing I won’t miss is grading papers”.

A perk of Mrs. Beck’s job as a language teacher has been that she has been able to travel with her students. She worked with a tour company to plan trips to Spain, Costa Rico and Mexico.

She loved to try different food in the countries and see the culture of each country.

“You get to see how people live,” she said.  “We forget what else is out there sometimes.”

But seeing students able to apply what they learned in class was the most gratifying part of the trips.

“Most memorable was seeing the students able to use language and things they learned in class,” she said. “Kids go to a country and see they can utilize what they learned.”

After retiring, Mrs. Beck hopes to find a part-time job working with young people, spending time with hobbies such as yoga and rehabbing furniture, hanging out more with her two children, and traveling more.

“For the most part it has been all good,” she says about her time at BASH, “and for that I am very fortunate.”