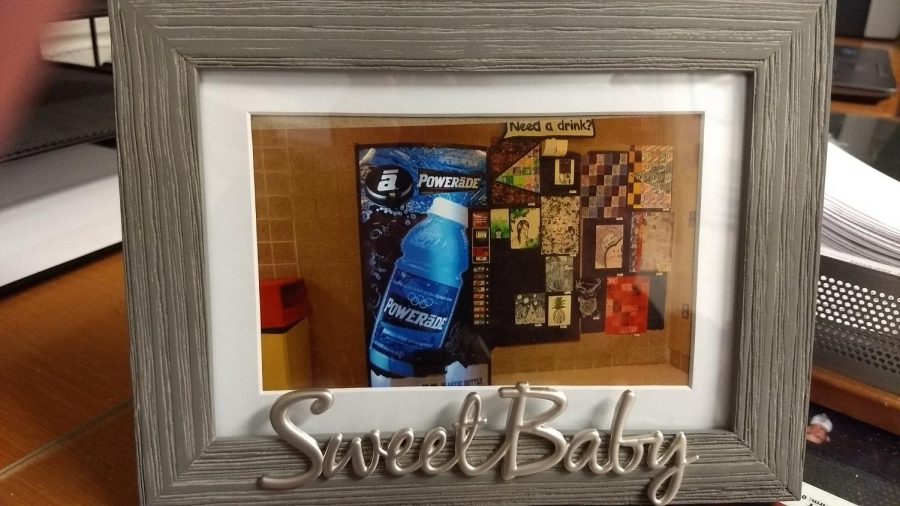 Mr. Cherkasky has a picture of one of the vending machines he fixed up on his desk.

Most students know Mr. Bill Cherkasky as the telecommunications teacher who runs BASH-TV — but he also is a vending machine expert.
He bought and refurbished the two drink machines set up near the weight room, along with a machine by the Cub Gym, and drink and snack machines for faculty. He earns the school money by doing this.
Any money made on the machines goes into repairs for the machines and a “sunshine” fund that has paid for things such as small improvements to the school not funded by the budget, staff parties, and  “outreach to faculty and staff in need, such as those recovering from a medical issue or the loss of a loved one,” Mr. Cherkasky said.

This year, the fund was able to purchase appliances for the new faculty dining room (located near the new cafeteria restrooms) including a refrigerator, microwave, and commercial Keurig machine.
The Powerade machine was bought in at the end of the school year last year off Ebay. It needed to be fixed up, though, before the school could use it. The cooling deck and lights needed to be replaced.
“I eventually replaced the dollar bill acceptor so that it would accept 5s,” he said. “I also replaced the coin mechanism so that it could give dollar coins as change to prevent people being stuck with loads of quarters.”
He purchased the Coca-Cola machine this year on Craigslist from an auto body shop in Philadelphia. Over the summer, he fixed up the machine by adding a new bill receptor and new control board.
“I also replaced the lights and the cooling relay (which makes the cooling deck turn on if the sodas are getting too warm),” he said.
Mr. Cherkasky taught himself how to repair and maintain the vending machines through a website that allows vendors the opportunity ask each other questions about repairs and receive advice on renovating old machines to make them more efficient.
“It’s a great way to learn and do things independently,” Mr. Cherkasky said.
When putting drinks in the machine, he has to abide by federal government rules for schools that only allow drinks 50 calories or less to be sold during school hours, so the Powerade machine and the Coca-Cola machine near the weight room is stocked with those kind of drinks and are accessible to students all day.

The most popular buys for the diet drinks in those two machines are Mountain Dew, Vanilla Coke, Cherry Coke, and Cherry Dr.Pepper, Mr. Cherkasky said.

To sell a drink that exceeds 50 calories, it has to be sold 30 minutes after student dismissal. The vending machine near the CUB gym, which Mr. Cherkasky also bought and maintains, runs on a timer and will only vend regular drinks after 3:30.

Drinks sold in this vending machine offer bottled water, regular gatorade and regular sodas.
The machine is used mostly by students who partake in after school activities, and there are many sales during sporting events.
“When people enter through the entrance, they can purchase a drink while they wait in line to get into the gym,” Mr.Cherkasky said.
Coca-Cola products sell for $1.00, the teas and Propel sell for $1.25, and the Powerade sells for $1.50. Mr.Cherkasky said he tries to sell the drinks at prices similar to the drinks being sold in the grocery store.
“If I go to WAWA and a can of soda costs 98 cents, then I’ll make the soda cost one dollar,” he said.
Mr. Cherkasky said he doesn’t consider being in charge of the vending machines a job, because he doesn’t get the money from the machines. “I do it as an act of goodwill.”