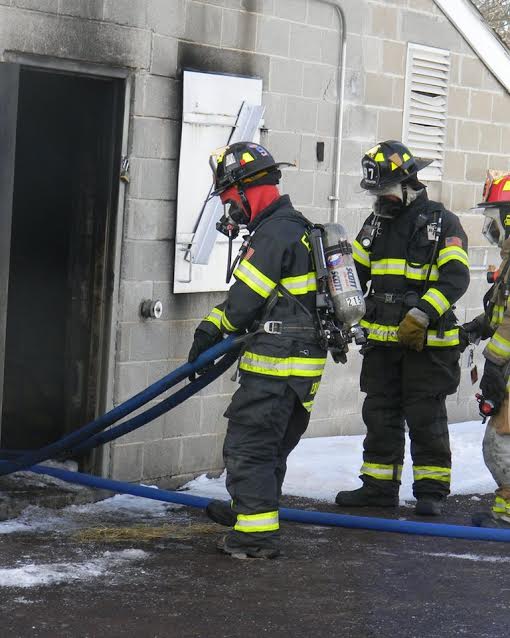 David Reitnauer trains with the Eastern Berks Fire Company, where he is a volunteer firefighter. (Picasa)

David Reitnauer trains with the Eastern Berks Fire Company, where he is a volunteer firefighter.

It’s Lit! Student Volunteer Firefighters Have a Burning Passion to Help Others

Around 5 p.m. on a weeknight, Junior David Reitnauer got one of his first memorable calls.

His pager went off and he was informed there was a traffic accident at the corner of Route 100 and Mill Street in Bechtelsville. He grabbed his fire gear and headed to the scene.
“One car was going to make a left onto Mill and came around the corner too fast and hit the other car on the side,” he said.

Three adults were injured, including a man who was trapped.

“The car was laying on his arm,” David said.

Because he did not have a lot of experience at that point, he did not help pull the man from the trapped car, but he did help one of the other injured people who had a neck injury.

“I got to help treat a patient and that was really cool,” he said, “because it was the first time I got the feeling of helping someone.”

David is not a full-time professional firefighter or the star of a TV police drama. He is a junior here at BASH and volunteers with the Eastern Berks Fire Company, which is a combined company with Bechtelsville, Bally and Barto. He is one of at least a dozen students who serve as volunteer firefighters or EMTs in local communities.

The car accident is one of many emergencies David has responded to. Others include brush fires, structural fires and medical emergencies.

Senior Austin Migliaccio, who is a volunteer firefighter with New Hanover Fire Rescue, said it’s sometimes hard to balance school work around his responsibility to the fire department.

“It’s hard,because when your doing homework or a project and your pager goes off,“ he said. “I personally can’t see how my homework is more important than someone’s life that is in trouble”.

Firefighters always have their pagers on, but they do not have to take a call if they are not around or really busy.

Even one call can take a lot of time. David ended up staying at the traffic accident he was called to for about 3 hours. “We wait until the cops are finished with their investigation,” he said.

David’s father also was there. He has been a firefighter with Eastern Berks since he was 16, and he is now an EMT. David’s grandfather used to be a firefighter, and his two uncles still are. Even David’s sister, who is 13, wants to become one when she’s old enough.

“It’s a family tradition,” he said.

Austin also said he became a volunteer firefighter in great part because his dad and uncle are firefighters in that same company.

“It’s the family business,” he said. “I am a  fourth generation firefighter, and there is nothing in this world I’d rather be doing.”

To become a volunteer firefighter, one has to be 14 and go through training. The first round of training is Essentials, David said. “It’s four mods…you do it on the weekend.”

Once he passes Essentials, David will have  earned his Firefighter 1 Certification. He has received other training, such as Vehicle Rescue Technician.

David enjoys firefighting so much that he plans to try to become a paid firefighter once he graduates.

It’s the family business. I am a fourth generation firefighter, and there is nothing in this world I’d rather be doing.”

“I’m thinking of going to Reading or Allentown,” he said. “I like helping and the excitement.”

“My dad was a junior firefighter in Boyertown,” he said. “It’s something I wanted to do.”
He has been called to a structural fire on County Line Road and a barn fire on Weisstown Road, among other emergencies.

“I like going on calls,” he said. “There’s an adrenaline rush you get when you hear the tones.”