Two BASH student-athletes share how they recovered from an ACL tear, an injury high school girls are more prone to than boys. 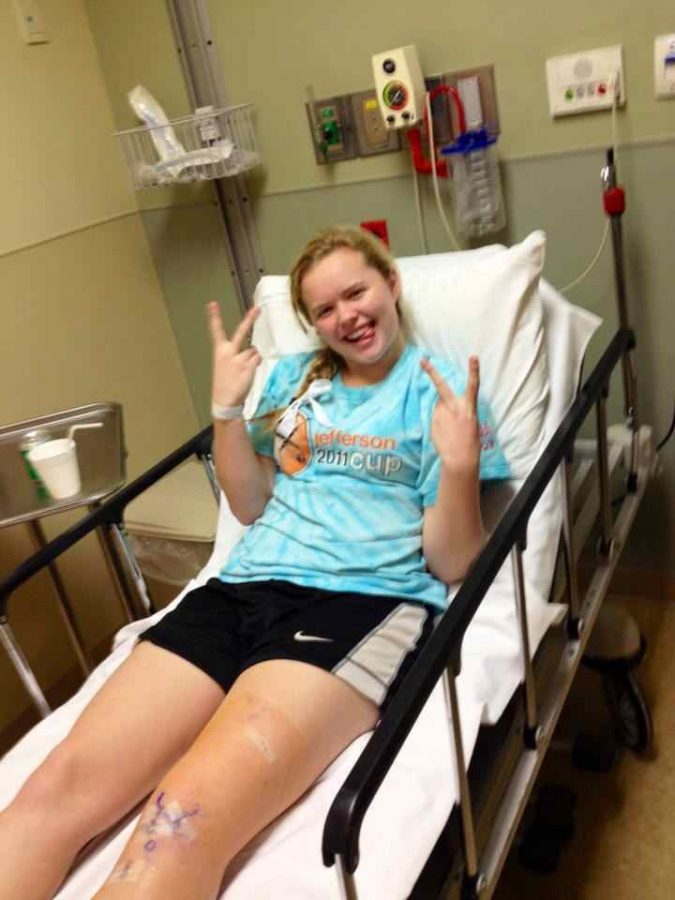 Senior Hailey Hambach in the hospital following her ACL surgery

Imagine being a committed athlete dedicated to the sport you love, and being stripped of your passion in the blink of an eye, not being able to do anything for over 9 months. Seniors Hailey Heimbach and Grace McFadyen explained their stories behind the process they went through and the struggles they are overcoming following the tearing of their ACLs.

The ACL (Anterior Cruciate Ligament) is the connective tissue of the knee. Each year, more than 250,000-300,000 cases of ACL injuries are recorded. It is more common for females to tear their ACL than males because women have a strength imbalance, and also have wider hips.  The ACL is the smallest ligament in the knee and is responsible for the rotational movement, which compromises people’s ability to walk, run, or do physical activities.

McFadyen tore her ACL two times in the same knee playing lacrosse but had a different surgery for each tear.  The first time it happened she was in her sophomore year and she had the hamstring graft surgery, which has a failure rate of 4.9%.  The second time it occurred during McFadyen’s junior year, and she had the Quadricep tendon autograft. Tearing a surgically repaired ACL a second time in the same knee is very rare.

“I mean, we all try, but you can’t change it, and it’s hard to stay positive,” McFadyen stated. “The reality is that you can’t do anything about it, so it’s stupid to stay sad the entire time. Little victories make it easier.”

Hailey Heimbach tore her ACL as a freshman and was unable to tryout for the high school lacrosse team. Doctors used her cadaver tissue to surgically repair her torn ACL.  However, she did not allow the injury to destroy her hopes for the future and her dreams of playing Division I lacrosse.

She is now committed to Division I school Coastal Carolina to continue her lacrosse career. Heimbach took this experience as an eye opener for her love of the game and strived to become a better player than she originally was.

“Tearing my ACL made me a stronger player, both physically and mentally. It made me realize how much I loved lacrosse. I believe it happened for a reason,” Heimbach said.

Being a cheerleader on the sideline can be very hard for a player who physically is unable to play.  For McFadyen and Heimbach, their own little victories helped push them to their end result – recovery.

“It wasn’t hard at first, but being a cheerleader gets old after awhile,” McFadyen said.  “It’s easy to want to stay positive for my teammates, but it’s actually hard. I love supporting my friends and teammates though.”

Kaleigh Gallagher,  a Lady Bears soccer and lacrosse player who has suffered similar injuries, believes that tearing an ACL is not the worst injury for someone to endure because people can recover from it.  Statistically, there is now a 98% recovery rate because of how far surgical techniques have come, compared to a 60% recovery rate in the 1950’s.

“You can recover from an ACL tear, unlike many other things that can happen,” Gallagher said.

Athletes put their bodies into strenuous activities and circumstances that can ultimately leave them injured. In many cases, athletes that suffer severe injuries early in their careers are prone to suffer another injury in the future.

“I don’t think my injury will affect my future. I do not let it hold me back, and I make myself play every game like it’s my last, because you never know what will happen,” Heimbach said. “I am 100% a different player. I’m stronger physically and emotionally. I play my heart out every game because you never know what will happen. Don’t forget about the past, but use it as a guide to make you stronger.”

All in all, it is hard to truly understand the mental and physical strain an ACL injury causes and how difficult it is to overcome.

“It’s not something you can understand until you have gone through it. The toll that it takes on you in unreal,” McFadyen said,  “It does not mean people can not support you along the way and help you overcome your challenges.”