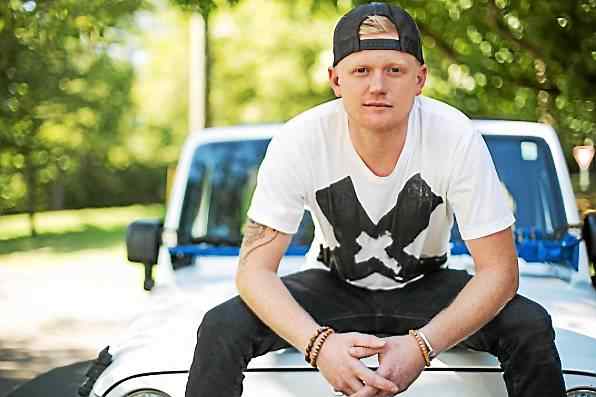 Josh Hish is a native of Bechtelsville and a 2006 graduate of Boyertown Area Senior High. He has since moved to Nashville to pursue his career as a DJ and artist. (Submitted)

Josh Hish is a native of Bechtelsville and a 2006 graduate of Boyertown Area Senior High. He has since moved to Nashville to pursue his career as a DJ and artist.

Having coffee is usually taken as a casual activity, but for Josh Hish, an invitation for coffee from the Silverado Records CEO meant everything was going to change.

DJ and artist Josh Hish, a native of Bechtelsville, has recently signed a record deal with Silverado Record Company for his blend of two not so similar genres: Country and Electronic Dance Music (EDM).

“I’ve decided I’m going to expand what I do. I’m going to shift from being a DJ and playing other people’s music to creating my own music,” Josh said.

Josh now resides in Nashville, where he turned his passion for music and performing into a full time gig.

At the age of 12, he was inspired by the DJ at his mom’s wedding reception who let Josh observe him up close as he worked. Although he was already involved with percussion in band at school, Josh was hooked on becoming a DJ.

“It intrigued me that based on the way he played certain songs, the crowd responded to what he was doing. It was almost as if he was controlling the crowd, and I really thought that was unique and kind of cool.”

By age 16, Josh was toting around a trailer full of all his own professional DJ equipment, and was making money too. His first gig was at his grandparents’ anniversary, but later he would be playing at numerous junior high dances and weddings. Before he was 18, DJing became Josh’s livelihood.

“Doing something that I love, and performing, well I kind of just ran with it.”

Josh graduated from Boyertown Area Senior High in 2006, then went on to attend college in Chicago. He had taken a class called Club DJ 1, but nobody there was getting any real experience- except Josh. He had taken it upon himself to start performing in many local clubs, even though he was still 18.

“In college is where I learned my craft and I really got into the club industry there. It’s a lot different than what you see at a wedding.”

He explained how after moving to Nashville in 2011, he started to DJ at places and private events all over the city.

In 2013 Josh struck gold. One night after work, he was at home listening to music when he realized the beat from Blake Shelton’s “Boys ‘Round Here” sounded very similar to the beat from the well known pop song, “Teach me How to Dougie.”

“I sat down one night after work at my computer, and I literally took the two songs and mashed them together. That’s where it all started.”

Josh began to make mash-ups of more country songs with EDM tracks, and played them in clubs he performed at. People started to hear his remixes, and his shows became a hit in Nashville.

In 2014, Josh was invited by country artist Brantley Gilbert to go on his “Let it Ride” Arena tour only two days before it was scheduled to begin.

“We played for 35,000 people right here in Nashville with a filled up crowd at the Bridgestone Arena- it was wild,” he said. Being on Tour was a big change of pace for Josh, who was now performing all over the country with a big name artist. “It’s so much fun being out on the road for the first time. I went from being at my desk job on monday to being on the tour bus that wednesday.”

Josh’s was making his music his full-time job. In the spring of 2015, Josh went with Chase Bryant on the “Take it On Back Tour” and toured again in 2016 with Dustin Lynch. In addition, Josh has played at some of Country Music’s most popular festivals, such as Stagecoach and Country Thunder.

Ever since his record deal with Silverado, Josh says he has had to make a big transition. Instead of mixing other people’s content, he now has to focus on recording and producing his own music with the help of his team.

“Right now we are in the studio working on my new EP. There will be new music coming very shortly.”

Josh says the hard part for him wasn’t the production or writing, which he had been doing for most of his life, but rather the chance to show off his talent to a wider audience.

“The biggest challenge was finding someone to believe in me and pay to send me to a studio to create my own music,” he said. “It’s all about having a team. Nobody can do it on their own.”

Josh has been busy performing live as well.

During Stagecoach last year, he performed a collaboration song with country artist Filmore in front of thousands of fans. “That’s when the game changes, when they’re singing your song and not someone else’s. It’s our music, and people love it,” he said. During the festival they even had a dance team choreograph and learn the song to perform each day. “We looked out, and there were hundreds and hundreds of kids dancing to our song in syncopation. It was one of the best things that has happened this far in my career.”

Besides music, Josh enjoys the comfort of being outdoors. He describes himself as an avid mountain biker, and he also loves to kayak.

“I’m actually a big outdoors guy,” he said. “Growing up in Boyertown, my buddies and I were pretty country.”

While things may be changing for Josh, he still has intentions for making something of himself and following his passions.

“I knew right away that if I wanted to make something of myself, I had to find a way of doing it differently. That’s how it’s always worked for me.”