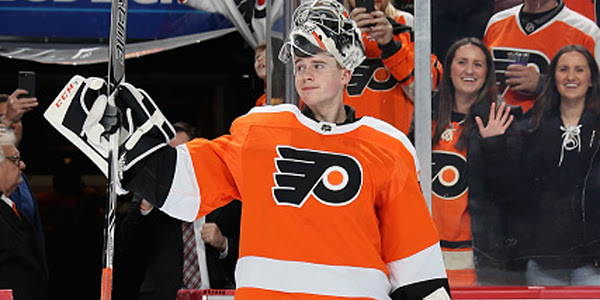 Carter Hart: The Answer The Flyers Are Desperate For?

Yeah, it’s one game, but we need all the optimism we can get. The turmoil for the Flyers continued on Monday as the Flyers fired head coach Dave Hakstol on Monday, and goalie Anthony Stolarz suffered yet another injury. Enter Carter Hart. Drafted 48th overall in 2016, the 20-year-old goalie has stirred up hype throughout the organization as the goalie of the future, and the Flyers need it, as the goalie situation in Philly the last 2 seasons has been nothing short of abysmal. With the one consistent goalie, Anthony Stolarz, along with Michal Neuvirth and Brian Elliot all injured, the Flyers needed Hart to make his debut earlier than intended, but he didn’t disappoint. Hart saw 24 shots and made 22 saves, getting the 3-2 win over the Detroit Red Wings. For his efforts, Hart was named a First-Star of the week by the NHL. The future is here, Philly, and he may be the only thing saving this season from being a total loss.