OPINION: Harvey’s handicap is a hoax

Harvey Weinstein sparked the #MeToo movement when dozens revealed his sexual misconduct -- is the walker a way for him to "weasel" away from justice? 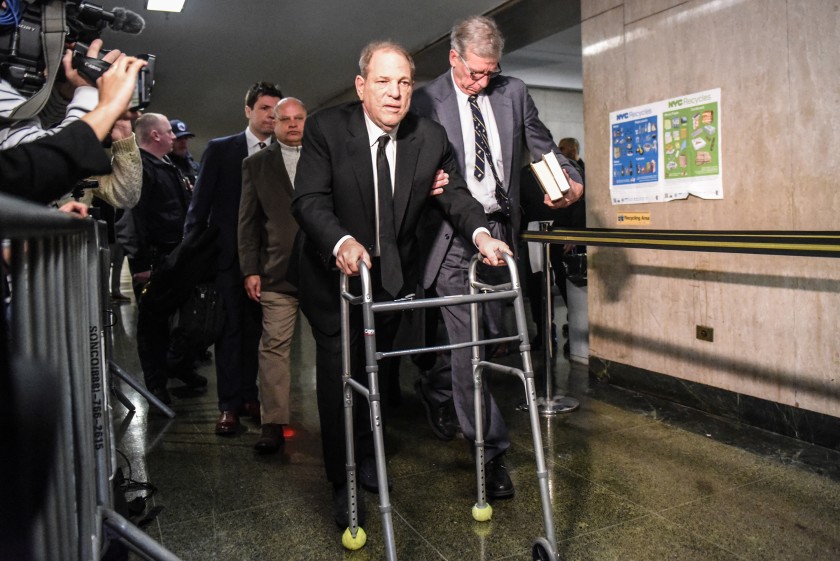 Harvey Weinstein appears a broken, withered shell of a man -- but is this a ruse?

Harvey Weinstein, accused by over 80 women of sexual abuse, charged on two accounts of rape (occurring in New York and Los Angeles respectively), and the cause of the #MeToo movement, has recently brandished a walker for his court cases — Hollywood theatrics to make himself appear feeble.

In October 2017, Weinstein was expelled from the Academy of Motion Picture Arts and Sciences and fired from his company following sexual abuse allegations revealed in The New Yorker and The New York Times (both of which were awarded the 2018 Pulitzer Prize for Public Service). Less than a year later, Weinstein was arrested in New York, charged with rape and various sex crimes, but released on bail.

Just this month, on January 6th, his rape trial has commenced and his image is now incomplete without a walker, which is even employed with green tennis balls, though wear on the walker seems unlikely due to how he’s only had it for a few months. He did, however, injure his back in a car accident last August, and received spinal surgery in December.

A car accident followed by spinal injury surely would justify the usage of a walker, but his inconsistent usage of the thing lends credit to the thought that his disability is at least exaggerated.

Now, why would an accused defendant exaggerate injury at their rape trial?

It is no flight of fancy to purport that the image of a withered old man is exactly what Weinstein wishes to depict for the sympathy of the public and, more importantly, the jurors. He is displaying physical weakness and dependence and ultimately, vulnerability. He is making himself out to be a helpless old man, or in other word, harmless.

Columbia Law Review has coined the phrase “the aesthetics of disability,” and also noted that physical markers of disability subconsciously affects jurors and leads them to employ more sympathy toward the accused. Disability isn’t like gender, sexuality, or race — not only can it genuinely affect how an individual should be treated, but people strongly believe that differential treatment is warranted for the disabled. So while this itself clearly isn’t an issue, a rapist utilizing such a “subconscious sympathy” to change views of his danger to society is unarguably twisted.

Jurors punish the accused in cases with disabled victims harsher than they do in cases with able-bodied victims, but they also give lighter sentences to disabled defendants (Law and Human Behavior). People are undeniably biased, and Weinstein’s tactics are dangerous and can potentially sway a juror, or possibly the entire jury. This is a man with sex crimes spanning from a mere few years to three decades ago, and the release of a powerful, rich rapist would prove a significant mistake.

Weinstein’s tactic isn’t even original, seeing as Robert Gregory Bowers, the man responsible for the Pittsburgh synagogue shooting, employed the exact same strategy with a wheelchair. Even the Golden State Killer, Joseph James DeAngelo, a man noted by his neighbors as “boisterous” feigned the inability to walk or even speak. These two men are verified murderers, and with little ability to sway anyone regarding their innocence or guilt, they saw the exploitation of the aesthetics of disability as a possible way out.

Weinstein’s use of the walker serves a function beyond the physical — he needs all the sympathy he can muster, and the feigning of weakness is the route he’s chosen for it, but let it be known that this vulnerability is spurious, his cowardice in the face of justice displays true weakness in his character.