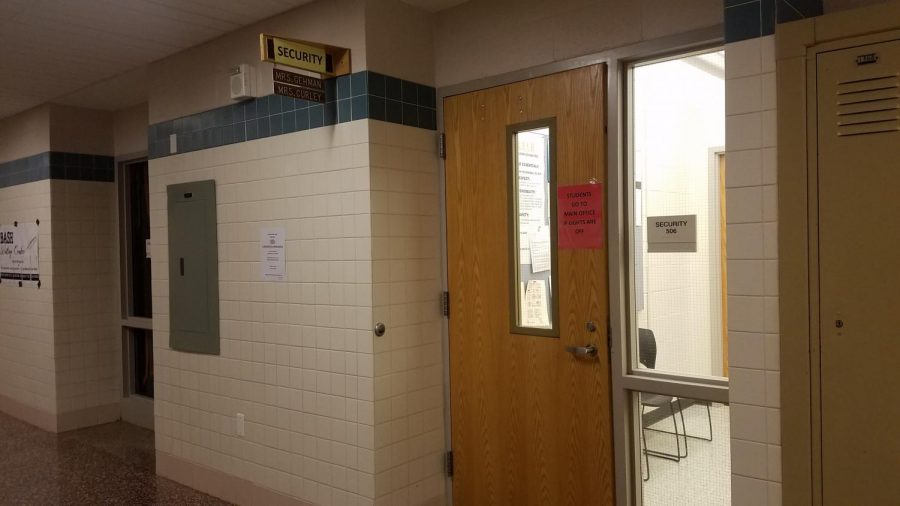 Security cracked down this past week on the issue of vaping, conducting many searches of students and their cars.

This past week, several student searches concerning vaping have been conducted by administration and security, including in student cars—a right that BASH outlines in the student handbook and has fueled student rumors around the school.

The student handbook rule titled “Searches” informs students of all property the school may search, including cars that are parked on school property. This stems from the 1985 Supreme Court ruling of New Jersey v. TLO, where the court majority found schools to be lawful in conducting student searches so far as they have “reasonable suspicion,” an ambiguous term differentiated from the constitutional protection of “probable cause.”

The term has come to mean security must have more than a hunch or a rumor, and BASH has no written definition for the term.

Some of security’s recent success is thanks to the help of some students.

“The students that we looked at, it was nearly 100% correct, so it’s not like our intel is inaccurate,” Grade Level Principal Mr. Jared Sparks said. “Student reports help as well, they have really helped this year with the accuracy of reporting that we’ve had.”

Searches can be done on the person, locker, “as well as anything on school property, including the car.” If there is anything in the car that may risk student safety, administration needs to act on it, Mr. Sparks said. Time-consuming searches can take administration away from other important school matters.

“Obviously these things are not tolerable, they’re against the law,” Mr. Sparks said. “If you see yourself around a situation where people are making poor decisions, you should remove yourself, whether that’s the bathroom or hallway or cafeteria or wherever it may be, including the parking lot.”

After the student comes down to meet administrator and security personnel, search procedure is in-depth.

“We’ll ask the student to unlock the car, we’ll look through the glove compartment, arm rests, pockets, seats, the trunk,” Mr. Maoury established. “Then there will be a student search that is done on the bag of the student as well, locker also, and then parents will be notified that this has occurred.”

If a student refuses to unlock the vehicle, the situation gets more complicated.

“If a student refuses, then we would contact the police and ask them to come, and they’ll be conducting the search,” Mr. Maoury said. “There is a punishment that comes with having a vape, and that punishment varies depending upon that student’s history with vaping, as well as cooperation and honesty during the search. “Progressive” is the word we use; the police are a little more cut and dry than we are.”

Students who are found to be in possession of a vape, especially one containing nicotine, are almost certain to be convicted of a summary offense in PA courts due to House Bill No. 97 of 2019, as well as the 1996 Act 145 dictating tobacco use in schools. Those convicted would also be subject to court fees, a $50 school fine, and a test kit fee of $10. This can have an impact on any student’s future.

“We don’t go into a search hoping that we’re going to find something, we go through a search hoping that we don’t find anything,” Mr. Maoury said. “When we’re able to find nothing, or learn that nothing inappropriate is on school grounds or on the student, that’s a positive thing as well. There’s actually a better feeling of safety or security that’s going around school.”

Despite administration’s best intentions, some students have found these searches to be problematic.

“It’s not right of them to go looking for ways to bust kids,” a senior that requested to remain anonymous said. “They can’t say they want ‘what’s best for us and to succeed’ and then go out of their way to screw us up.”

Not every student who opposes the searches vapes, either. Many dislike vaping.

“Vaping has become really popular over the past few years, and although the effects on the human body are still not fully understood, it’s known to be very unhealthy,” another senior who also asked to be anonymous said. “I believe it’s too easy for minors to obtain vapes and it should be more regulated. While I don’t care what people engage in on their own time, I’m very against the usage of vapes in school, as people risk their education.”

Despite advocating against vapes, the senior does not support the searches, either.

“The school has the right to search, although I believe it took advantage of the students,” the second senior said. “It occurred right after a holiday weekend, when students are most likely to be holding alcohol and other substances in their cars.”

The action the school as well as state government have made has resulted in negative consequences, the student believes.

“By punishing a multitude of students at once, the school is only hurting students rather than helping,” they said. “In regard to the legal punishment, I believe it’s too harsh for an adolescent to be charged as a criminal for such a minor offense. They should not have their whole future jeopardized for a mistake made while a teenager.”

Other students, such as sophomore Aiden Martin, support the school wholeheartedly.

“Vaping is bad, to start off. I think vaping is harmful to your health, and shouldn’t be allowed,” Aiden said. “It’s a personal choice of mine not to do it, because it’s not a social thing for me, it’s more a personal health thing for me. I think [the searches] were appropriate. If it’s on school grounds, I think it should be allowed.”

Still, others wish that the school would remind students of the search policy in the handbook, while acknowledging the school’s right to search.

“I think that yes, the school has a right to search cars,” Junior Emily Goetz said. “However, they need to make students aware of that right before they buy a [parking] pass in some form of a contract that the student signs saying they understand the rules. All the rights the school has regarding your car should’ve been stated clearly on the paper you have to go fill out to get the parking pass, and not just a reference to the handbook.”

Administration hopes that students learn to protect their health after the actions from this past week.

“Hopefully students are more aware that their car is parked on school property, and if they choose to make poor decisions that they do not do so in our school or on school campus, and ultimately at all,” Mr. Sparks said.