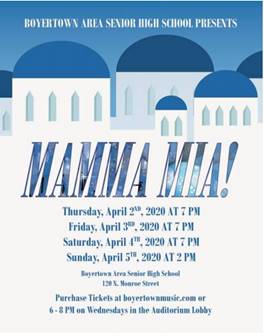 "Mamma Mia!" comes to BASH after being made available for high school productions in 2018.

This year Boyertown Area Senior High is performing the award winning musical Mamma Mia! on April 2nd-4th at 7:00pm, and on April 5th at 2:00pm. There are still tickets left that can be purchased at https://www.boyertownmusic.com/, and you better hurry – they’re selling out quick! You won’t want to miss this show: the cast has been hard at work to make sure the show is good and enjoyable for everyone in the area.

The show is coming along well. So far, the cast has had countless rehearsals and have gone through most of the songs and scenes. They have a very busy schedule, with rehearsals every Monday, Wednesday, Thursday, and Saturday. As the cast is spending more and more time with each other, they are getting to become closer.

“It feels like it’s all coming together, sets are starting to be made, and we are progressing with the songs more and more every day. It feels like we are really making the show,’’ a source says. Makenna Maxymillian adds, “The rehearsals are going good right now, and there are no surprises yet.”

It’s clear the cast is having an amazing time as well. Many people are really enjoying rehearsals.

“I think everyone’s doing a very good job, and it’s so fun being in such a talented group of people,” said lead actress Sydney Kuszyk, “and I think Boyertown presents all their musicals really, really well, and there’s always an exciting outcome.”

Now, in order to make the show happen, there is a lot of help needed outside from the cast and directors. There is tons of effort from outside volunteers, particularly parents. Volunteers such as Kevin Burr are able to make the sets for this award winning musical on Tuesdays, Wednesdays, and Saturdays.

“It’s kind of cool, it’s like parents who volunteered in past musicals that just kept coming back,” Ashlee Bennett said of the costume designers.

“We help out Mr. Hazel and we run lines with people, and we hang out and do stupid stuff,” she said.

Yet, some of the cast will admit that not everything is all fun and games. Tommy O’Donnell, who was cast to play Pepper, admits that, “It’s challenging, but it’s really rewarding.”

Overall, everyone involved will agree the musical is going really well. Everyone is having a great time, and ready to put on an amazing show. So, make sure you get your tickets – you won’t want to miss it!