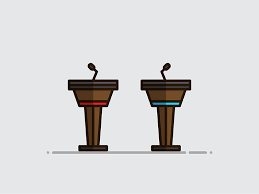 Boyertown Debate Club, a newly formed club focused on debating and developing argumentative and speech skills, has had two successful meetings so far this year.

The first meeting focused on the introduction of the club to around thirty members. Going through a few silly topics, the group finally settled on “Is a hot dog a sandwich?”.

“The club is going fantastic so far,” Kyle said. “Its objective is to give an opportunity for people to speak their minds, and it’s doing just that.”

Inspiration for the founding of the club came from four students love for English class debates.

“Debate Club is an excellent example of the ability of students to change and interact with the school system to create something new,” Blaze said. “The club has been extremely interactive with each other, we have great communication, and the meetings have been rather civil.”

Junior Spencer Seivard echoed the sentiment that members have treated each other with respect during and after the debates.

“The debates are led well and kept in topic by the leaders of the group,” Spencer added.

Mr. DiLanzo is excited for the future of the club.

“The club officers have done an awesome job organizing meetings, and the turnout has been great,” Mr. DiLanzo said. “I felt like the last discussion could have lasted another hour.”

He added that, “it’s cool seeing 9th-12th graders work together,” commenting on how impressive the public speaking, rhetoric, and professionalism has been “across all grades”.

Debate Club meets every other Wednesday in the Library classroom after school. Meetings last for around 45 minutes each. Contact a member for information on joining.

While not focusing on competing this school year, the club hopes to enter some competitions next year.