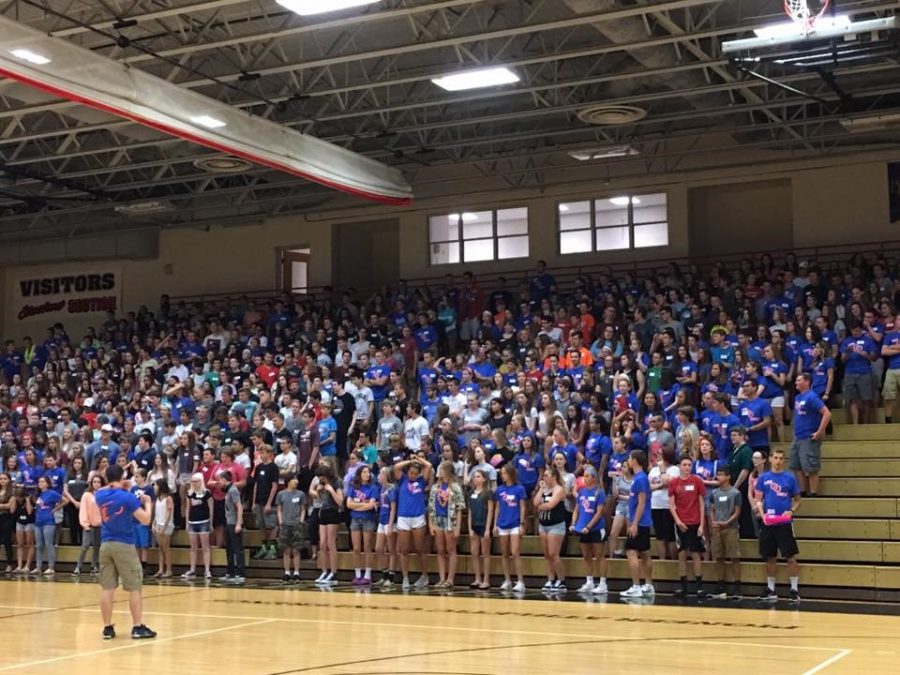 Coming to a school more than twice the size of middle school, mixing with upperclassmen, and having to find a balance between challenging school work and extracurricular activities can be intimidating.

“The goal of link crew is to have upperclassman who have demonstrated leadership skills basically mentor the freshmen,” she said, “kind of like the Big Brother Big Sister program a lot of cities do.”
Last spring, about 100 11th and 12th graders mentors were chosen to be Link Crew leaders and went through multiple days of training in the spring and summer.

Then, a few days before school started, freshman attended an all-day orientation where they were put into groups of 8-10 with two Link Crew mentors and did icebreaker activities. That evening, Link Crew also hosted a social for them.

Freshman Hailey Stutzman said that her group talks and sets goals, and does fun team-building activities.  They also play games.
“One time we played a game where you were with a partner and you could only use your non-dominant hand to make a paper airplane. The airplane had to throw far enough into a bin. It was fun,” ninth grader Spencer Reynolds said.
Another activity the group did was a themed trivia battle about unfairness. One team got easy questions and the other got hard. The winning team got Skittles.
“I learned that life in school can sometimes be unfair,” freshman Marlaina Garczynski said.
Link Crew also is starting to plan freshman-only events to boost the morale of the freshmen class.

Many freshmen are having fun with the program, but they are also learning important information.
“It has helped me know what to do and know my way around the school,” Freshman Noelle Allonce said. “I also know that if I have any trouble I have someone to go to.”

That is the purpose of the program, Link Crew Leader Senior Tess Lignelli said.

“It helps them be more comfortable.”
Freshmen say that the Link Crew leaders have been helpful.
Ninth grader Connor McNeill said his leader, Doug, “is amazing. He is a legend.”
Link Crew Leader senior Mikayla DeStefano said adjusting to a new school has taken some time for the students she has worked with.
“When I first met them they were very standoffish, but a few of them were very attached to me and always wanted my advice,” she said. “I want them to know that I want to help them adjust and just be their mentor through the year.”