On Trump: A Refreshing Choice for Upset Voters

As the 2016 presidential race drags on, Trump still remains at the head of the pack 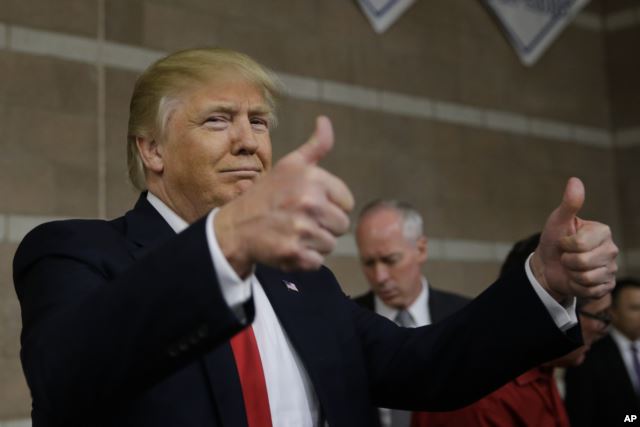 If anyone would have said two years ago that a multi-millionaire real estate mogul with incredible hair was going to be leading the primaries for the 2016 presidency, most would have called them crazy.

But, alas, Donald Trump has been the GOP front runner practically since the beginning of the race, and most Americans are still wondering why.

Trump is constantly barraged with criticism for his unconventional, unpredictable, and rash actions — and rightfully so. But it is because of these characteristics that Trump might not be a bad choice for America.

On Tuesday, March 2nd, also known as Super Tuesday, a dozen states held their primary elections, where voters turn out to help decide who will be running for president under the Democratic and Republican parties. For the Democrats, Hillary Clinton not surprisingly dominated Bernie Sanders — winning 7 out of 11 states. Similarly for the Republicans, Donald Trump left Cruz, Rubio, and the other GOP candidates in the dust- also winning 7 states.

The fact of the matter is this: Trump is not a phase that will go away like many might have thought months ago. He is here to stay, and quite obviously is a serious threat to anyone else running for president.

Let it be known that this is driving the GOP absolutely crazy. The Republicans really do not want Trump to be their candidate for many reasons. First, he is not the typical conservative. His rhetoric is extremely questionable, especially when it comes to specific hows or whats on certain issues. Nor does he preach about Christian values, like Cruz or Carson.

Second, he is wildly unpredictable. Trump has no problem being politically incorrect to get his point across, and if he is supposed to represent the Republican party, there is quite a big risk in that. Plus, they don’t think he could realistically defeat Hillary Clinton, who will probably win the democratic nomination.

But the polls argue otherwise. And in addition to a large number of voters, even big name politicians like New Jersey Governor Chris Christie, who recently dropped out of the race, are pledging their support.

So the question still remains: If everybody seems to think Trump is so terrible, ignorant, rash, offensive, and fascist-like, then why is it becoming increasingly likely that he could be our next President?

Here are some theories:

Let’s begin with the media. Over the past 9 months, every single media outlet has been crazy for Donald Trump. Everything he says or does is a big deal — mostly because nobody would ever think a presidential candidate would act the way Trump acts. The stuff he says is outrageous, so no wonder he gets more airtime than any other candidate. News stations want more people to watch their programs, and what a better way to do that than to show a famous millionaire running for president telling his supporters about how he wants to build a giant wall to keep illegal immigrants out! Everybody knows about Trump simply because the media has made it impossible not to. Therefore, everybody starts talking about him. They say there is no such thing as bad publicity, and for Trump’s sake it has proved to be scarily true.

He also had the advantage of being extremely well known before the race even began. Nobody knew who Rand Paul, John Kasich, or Marco Rubio were, unless they are into politics. But Donald Trump? I mean, this guy is iconic. Almost nobody knows the platforms of Cruz or Rubio, because they’re too focused on what crazy thing Donald Trump will say next, and the reporters will be right there to eat it up.

Trump also is refreshing. Many Americans can’t remember the last time a political candidate was blunt, direct, and courageous enough to speak what is on his mind. More importantly, he is not afraid to talk about touchy issues that politicians shy away from and that Americans actually care about.

The other candidates are politicians. They have mastered the classic Washington robot speech that keeps an even keel and doesn’t go anywhere near the category of offensive or controversial. The truth is, the American public is sick and tired of that, so Trump is a refreshing alternative. He is a candidate that cannot be bribed or persuaded by D.C. bullies, nor corrupted by the political machine. He’s not a career politician; he’s a businessman.
“What I say is what I say.” -Donald Trump at the Republican Presidential Debate on Aug. 6, 2015
Also, a lot of people compare Trump to Hitler, as if they’re afraid he’s going to take over and start a fascist dictatorship. That is not going to happen. Though it is important to recognize how fanatic his followers become, in no way could Trump have any chance of taking over the government. It’s just a little too out there.

Of course, there are lots of concerning aspects about Trump. Quite obviously, he says a lot of things but never provides much explanation on about how he is going to do them. This might sound typical of a presidential candidate, but Donald Trump takes it to a whole different level. He says he’s going to build a wall, but he doesn’t give a realistic source of revenue or justification for this project.

He also seems to repeat the same things over and over again. If there’s a question about economic policy, he’s going to say something about China then tell how he’s hired lots of Hispanics, to prove that he’s not racist.

His outspoken nature is also worrisome. The president has many public duties — speaking at press conferences and hosting dinners. If he becomes president, Trump would be considered a legitimate world leader who is expected to work with other leaders to solve international issues. This is troubling because Trump appears to exhibit a “my way or the highway” mentality. Some fear Trump could jeopardize a plausible compromise as not to kill his own ego.

However, the potential positive effects of Trump’s brashness outweigh the negative.

Inherently, the people of the United States are looking for a strong leader. They are dissatisfied with the Obama administration and seek someone who deeply cares about Americans and American values — not a cookie-cutter politician who does their best to please everyone. Americans want something to change in the government and have been wanting it for a long time. This, when it comes down to it, no matter how much we hear people degrade him, is why a large majority of voters are turning to Trump.

He may be unpredictable and wild, but at least he will hopefully make a decision that is in the best interest of his people. What Trump will not do is sit there and do nothing. Despite the very rough edges, Trump has the makings of an incredible leader — one who is able to get people on his side and take action when it matters.

In the grand scheme of things, Trump’s journey is not a new one. Every so often, this country goes through a period of American nationalism — and Trump’s new rhetoric and energy has awakened this feeling. This country is due for a major political shift, and Trump becoming president could be the biggest thing to happen since Reagan took office. Whether people like it or not, Donald Trump is changing the face of American party politics every single time he takes the stage — and he’s doing it with style.

So can Trump make America great again? We will have to wait and see.