Whiplash Lives Up to It’s Name

Movie About Drumming An Exciting Ride 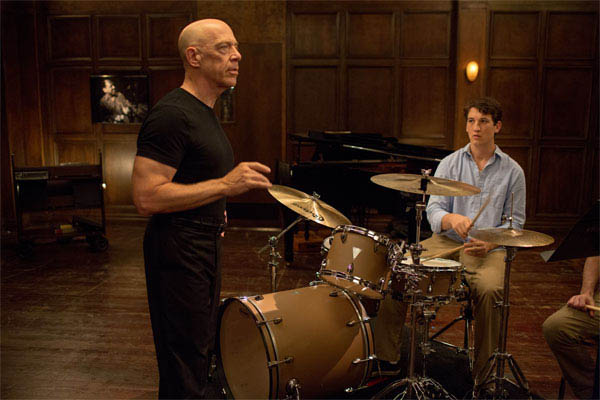 Hard to believe this, but probably the most exhilarating movie of 2014 was Whiplash. And with a name like that, it’s be some breakneck action movie filled with stunts and explosions,right? It’s not. It’s about drumming.

But it might as well be an action movie, as writer/director Damien Chazelle shoots every scene with close ups, long shots, moving camera angles, shifting focus, and masterful editing from Tom Cross. And it works. It painfully, exhaustively, blisteringly, gruelingly works. And in the best possible way.

Which makes it even more impressive, considering on paper it shouldn’t. It reads like every cliche underdog story. Here’s the setup: 19-something Andrew Neiman, played by the increasingly impressive Miles Teller, is an aspiring drummer. One day, he gets a visit from Terence Fletcher (J.K. Simmons), a well-known music director for one of the most prestigious music schools in America. He’s tough and hard around all his students, but he seems to take a quick liking to Neiman. He accepts him to his academy and band, and soon Neiman begins to like him, too. Feeling welcome as a new member, he starts to relax and let his guard down.

There’s a reason Simmons has been winning literally every supporting actor award, and that’s because he’s quite literally the most terrifying movie monster in recent history. He sees something great in Neiman, and won’t stop for a second in berating him and forcing him to work harder. “I push people beyond what’s expected of them. I believe that’s an absolute necessity”, he says towards the end of the movie, perfectly summing up his character. Not a minute of his screentime goes by without him swearing, screaming, harassing, and insulting Neiman, often within the same sentence.

But its more than just vocal power that gets under his skin. He has him play drum beats over and over again because he’s going too fast or too slow or out of tune. Sometimes there’s nothing wrong with the way he’s playing; he just wants to mess with his head to get him to play harder. If Simmons doesn’t win the oscar, I’ll eat a refrigerator.

Neiman clearly takes to straight to heart what Fletcher tells him, and instead of standing up to him, he pushes himself further and further, even breaking up with his girlfriend (Melissa Benoist), claiming she’ll just take up his time and prevent him from becoming a better drummer. It’s a heartbreaking scene, and makes the viewer begin to question whether all this effort is worth it.

Instead of answering this question, Chazelle wisely keeps it open and begins to raise the stakes. We watch in agony as we see how far Neiman will push himself, and how far Fletcher will let him, to become the best. He cries and bleeds, and shows pain in his face constantly, but keeps on going. There’s more bloodshed in this than in some horror movies.

Chazelle keeps raising the stakes in the movie, cranking up the tension like a vise. Every time things settle down, something else is thrown in, but never for plot convenience. It always feels like a genuine hurdle, not just like an unnecessary twist. It all builds to the movie’s climactic drum solo, in easily the most exciting, heart stopping ending of the year. My heart was pounding faster than the drums, and not for one second of could I think of something else. It’s absolutely perfect. And ultimately, despite how grueling and painful it is to watch, it turns out to be the most rewarding movie of the year.

It took a while before it settled in me, but now that it has, I cannot wait to see it again.